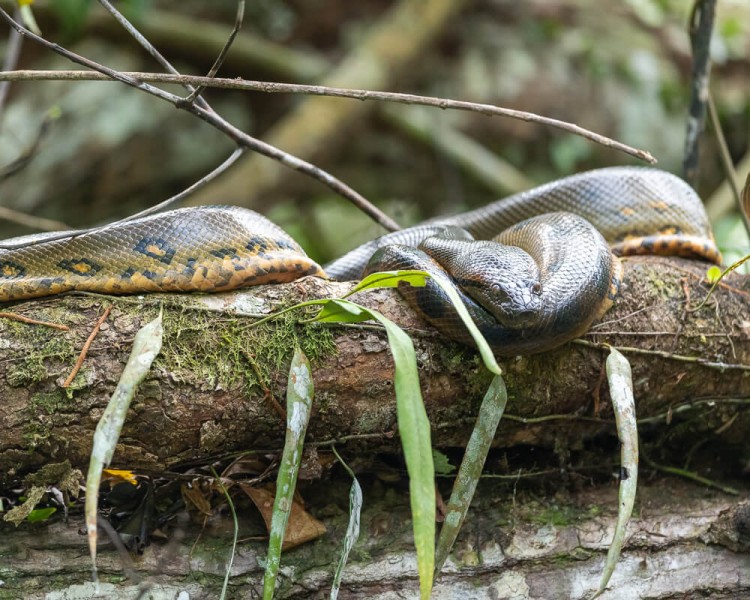 Anaconda or “Green Nconda” belongs to the boa family and is one of the biggest existing snakes. Like all boas, it is a non-venomous constrictor. Anaconda’s females are much bigger in size than males and have clearly marked sexual dimorphism. Anacondas are mainly olive-green with black spots all around their bodies. Anaconda’s head has clearly expressed orange-yellow stripes on both sides and is narrow for its body size. The eyes, located on the top of the head, help anacondas observe the surroundings without coming out of the water. Anacondas’ major habitat is Latin America’s tropical flatlands. The anacondas are most frequently found in basins of the Amazon River (Brazil), Orinoco River (Columbia), and Los Llanos (Venezuela) - vast tropical grassland plain. They are semi-aquatic animals, living partly on land and partly in the water. Anacondas prefer plains, rainforests, savannas, freshwater areas as well as areas where the water is not very deep. 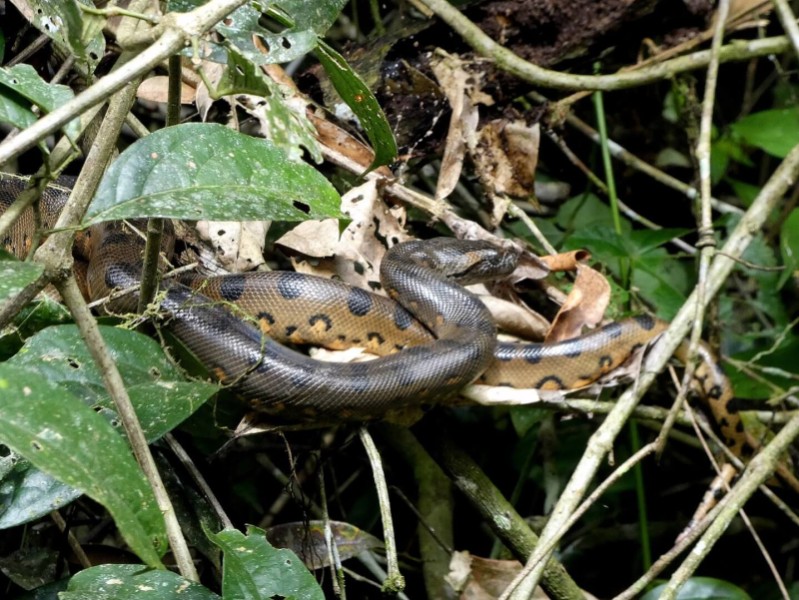 Anacondas are nocturnal creatures and lead a solitary lifestyle. Being water-dwelling reptiles, anacondas are fast in the water while slow on land. Most of their lives they spend in the water, staying underwater for long periods. Anacondas are comparably passive in daytime heat and start moving at dusk when the heat subsides. They often pass long distances very quickly, usually when the dry season reaches its highest point or when they look for mates.

Anacondas are opportunistic apex predators, which means that they usually don’t have any general plan and take advantage of any chance to have a tasty meal. They usually feed on other reptiles, sheep, dogs, tapirs, fish, birds, wild pigs, deer, and rodents as well as any kind of available prey that they are able to catch and swallow.

These anacondas are polyandrous animals, meaning that a female mates with more than one male while each male mates with only one female. Anacondas mate during the dry season, which is from March to May. Usually, the process of mating lasts up to several weeks. Females don’t eat during the gestation period, lasting about seven months. For this reason, after mating, a female can eat her partner to go through this long period. Female anacondas are ovoviviparous. After the incubation period, lasting 7 months, a female gives birth to up to 82 young (though the average number is 20-40). Newborn youngsters are entirely independent: they don’t get any protection and care from their mother and have to be able to fend for themselves. Reproductive maturity is reached at the age of about 3 or 4 years. 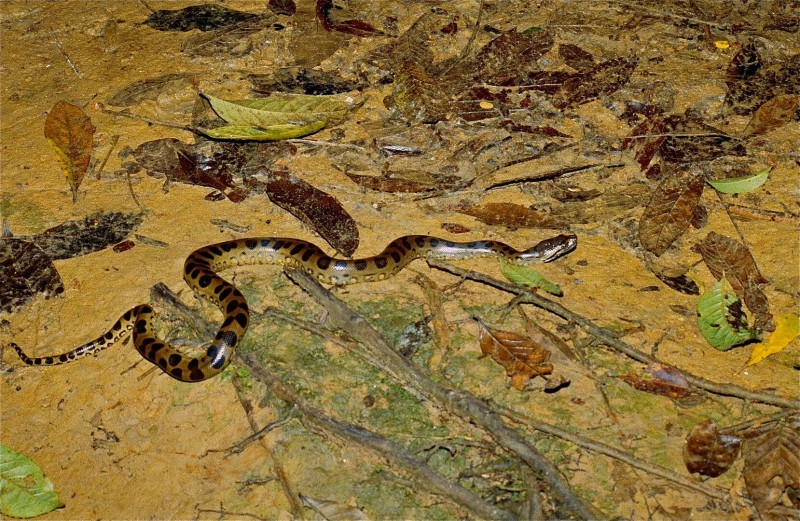 As always, the major threats have to do with human activity. In this case, it’s the trade of exotic species. Anacondas are included in Appendix II of CITES (Convention on Trade in International Species). Anacondas are hunted and killed for their skin having huge demand on the black market. They are also persecuted in human settlements as a danger to humans and domestic animals. Anacondas are also threatened by illegal deforestation on account of the carelessness of the local authorities. This brings anacondas to habitat loss even in protected areas.

The IUCN Red List and other sources don’t provide the number of the anaconda total population size. Currently, this species is classified as Least Concern (LC) on the IUCN Red List.

Being predators, anacondas feed upon a wide variety of vertebrate animals. Young anacondas, in turn, become prey for larger predators.