Anna's hummingbirds are small colorful birds native to the west coast of North America. They have an iridescent bronze-green back, a pale grey chest and belly, and green flanks. Their bill is long, straight, and slender. The adult male has an iridescent crimson-red derived from magenta to a reddish-pink crown and gorget, which can look dull brown or gray without direct sunlight, and a dark, slightly forked tail. Females also have iridescent red gorgets, though they are usually smaller and less brilliant than the males'. Anna's is the only North American hummingbird species with a red crown. Females and juvenile males have a dull green crown, a grey throat with or without some red iridescence, a grey chest and belly, and a dark, rounded tail with white tips on the outer feathers. 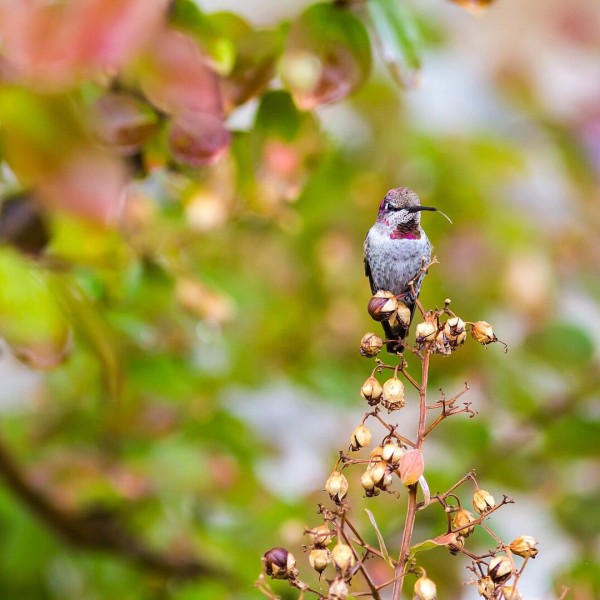 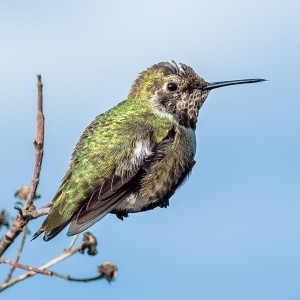 Anna's hummingbirds are found along the western coast of North America, from southern Canada to northern Baja California, and inland to southern and central Arizona, extreme southern Nevada and southeastern Utah, and western Texas. They tend to be permanent residents within their range. However, northern and southern populations may migrate and birds have been spotted far outside their range in such places as southern Alaska, Saskatchewan, New York, Florida, Louisiana, and Newfoundland. Anna's hummingbirds inhabit open woodland, forests, grasslands, chaparral, and oak savannahs and are well adapted to city parks and gardens. They prefer to breed in open-wooded or shrubby areas and mountain meadows along the Pacific coast from British Columbia to Arizona. Anna's hummingbirds are solitary and very territorial birds. They are active during the day spending their time collecting nectar from flowers using a long extendable tongue. They also consume small insects caught in flight or gleaned from vegetation. Anna's hummingbirds have the northernmost year-round range of any hummingbird. During cold temperatures, these small birds gradually gain weight during the day as they convert sugar to fat. In addition, hummingbirds with inadequate stores of body fat or insufficient plumage are able to survive periods of subfreezing weather by lowering their metabolic rate and entering a state of torpor. Anna’s hummingbirds are generally not very vocal birds. The males' call is scratchy and metallic usually made when they perch in trees and shrubs. These birds are also frequently seen in backyards and parks, and commonly found at feeders and flowering plants.

Anna's hummingbirds are herbivores (nectarivores) and feed on nectar from flowers and tree sap. They also consume small insects and spiders.

Anna's hummingbirds are polygynandrous (promiscuous); they don't form pair bonds and both males and females mate with more than one partner each breeding season. Anna's hummingbirds breed from mid-December until June; during this time males sing and perform spectacular dive displays over their territories which they also use to drive away rivals or intruders of other species. When a female flies onto a male's territory, he rises up about 130 ft (40 m) and then performs a dive. At the bottom of the dive, the male produces a loud sound described by some as an "explosive squeak" with his outer tail feathers. The female raises her young without the assistance of the male; she builds a nest in a shrub or tree, in vines, or attached to wires or other artificial substrates. The round nest is constructed of plant fibers, downy feathers, and animal hair; the exterior is camouflaged with chips of lichen, plant debris, and occasionally urban detritus such as paint chips and cigarette paper. The nest materials are bound together with spider silk. The female lays 2 white eggs and incubates them for about 14-19 days. Chicks hatch altricial with very little dawn and their eyes closed. The young remain in the nest 18 to 23 days and reach reproductive maturity when they are 1 year old. Anna's hummingbirds are not considered endangered, however, these birds suffer from habitat loss, and predation of feral cats, tree snakes, and other bird species.

According to IUCN Red List, the total population size of Anna’s hummingbird is 9,600,000 mature individuals. Currently, this species is classified as Least Concern (LC) on the IUCN Red List and its numbers today are increasing.

While collecting nectar during foraging, Anna's hummingbirds assist in plant pollination throughout their ecosystem.