The Arabian oryx is amongst the largest desert mammals of the Arab region and throughout history has been an important aspect of its heritage. Once extinct in the wild, it once again inhabits the dry Arabian Peninsula. This species is a desert antelope that is highly adapted to its harsh desert environment. Its bright white coat serves to reflect the sun’s rays and its hooves are shovel-like and splayed, giving the animal a large surface area when it walks on the sandy ground. Both males and females have splendid straight, ringed horns as long as 68 centimeters (27 in) long; the female’s being thinner and longer than those of a male. These animals are famous for their stamina and beauty and have inspired many Arabian poets. 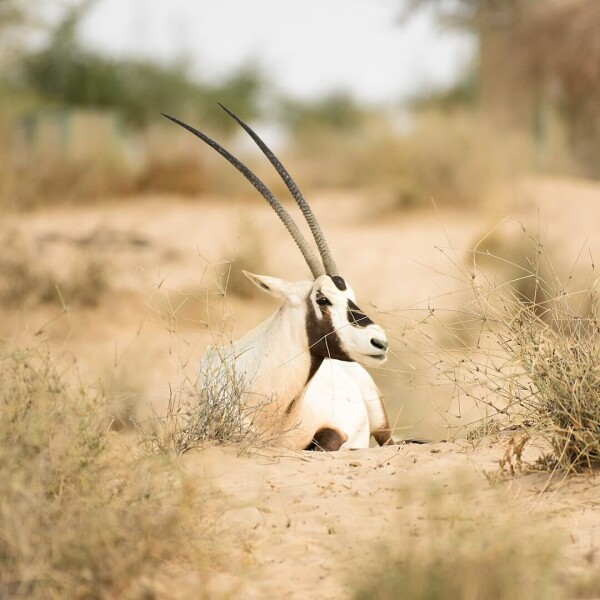 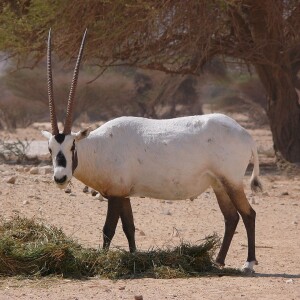 This animal is endemic to the Arabian Peninsula. In 1972 it became extinct in the wild, but was saved by zoos and private reserves, and reintroduced into the wild from 1980, and, as a result, wild populations now live in Israel, Saudi Arabia, and Oman, and with current additional reintroduction programs taking place, it is likely that this range will expand into other countries of the Arabian Peninsula. Arabian oryx inhabit the deserts and arid plains of Arabia, where temperatures can reach 50ºC even in the shade during summer. Arabian oryx are gregarious animals and typically form herds of 5 to 30. If conditions are poor, groups tend to consist of just a male with a couple of females, together with their young. Some males live a more solitary life and hold large territories. Within the herd, a dominance hierarchy is created by displays of posturing, which avoid serious injury from their long, sharp horns. These animals seem able to detect rainfall a great distance away and live an almost nomadic life, traveling vast areas searching for precious new growth after the intermittent rains. They are active mostly in the early morning and in the late evening, resting in groups in the shade when the searing midday heat is present. Oryx dig depressions in the ground with their front hooves, so they can lie in cooler sand, which provides some protection against fierce desert winds.

Arabian oryx are herbivores and eat grasses and herbs, as well as roots and tubers. They can last without drinking water for a long time.

Arabian oryx are polygynous breeders. This means that one male mates with many females in one mating season. The timing of births varies. However, if conditions are favorable, a female is able to produce one calf a year in any month. Most births occurring in introduced herds in Jordan and Oman occur from October through May. Gestation for this species lasts about 240 days. The young are weaned by the age of 3.5-4.5 months, and females in captivity first give birth when they are 2.5-3.5 years old. 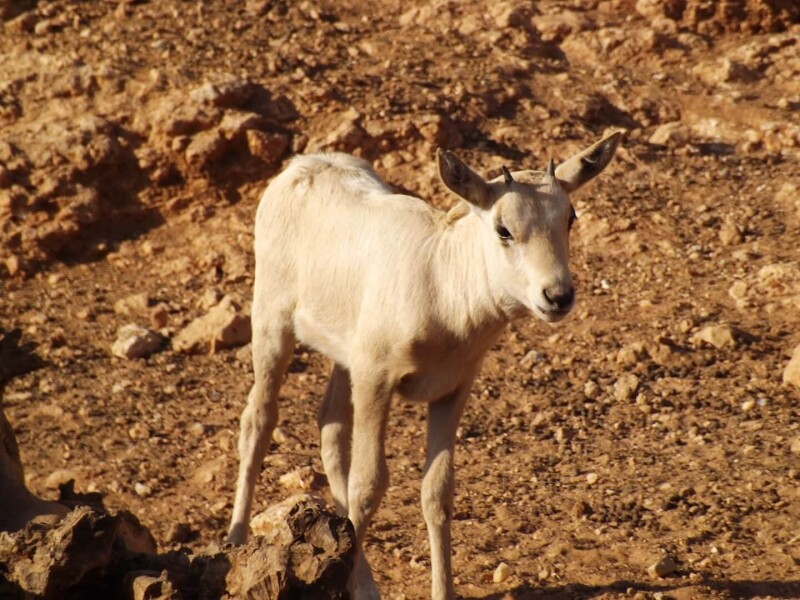 The Bedouin people who live on the Arabian Peninsula are traditional hunters of Arabian oryx for their hides and meat. However, the total decimation of these animals occurred after World War 2, when firearms and motorized transport became available, and there was a demand for sport hunting. In 1972 the last known animal was shot and the species was made extinct in the wild. In the 1990s the reintroduction of herds was a success and now poaching has again become a serious threat that has devastated the population in Oman.

According to the IUCN Red List, the total Arabian oryx population size is 1,220 individuals with 850 mature individuals. Currently, this species is classified as Vulnerable (VU) but its numbers today are stable.