The Black-and-white ruffed lemur is one of the largest lemurs and the second loudest primate after the howler monkey from central and South America. With its striking black and white pattern, it is amongst the most iconic of the lemur species. Its name comes from the large white furry ‘ruff’ around its neck. It is classified as critically endangered, which makes it one of the most endangered of the lemurs, being just one step from extinction in the wild. 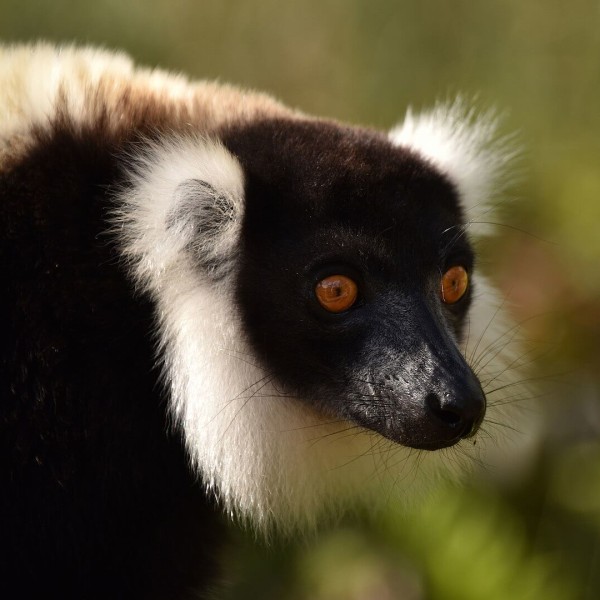 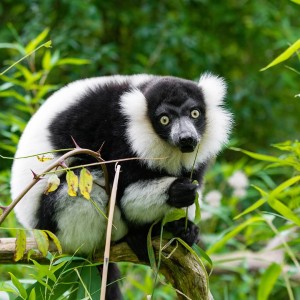 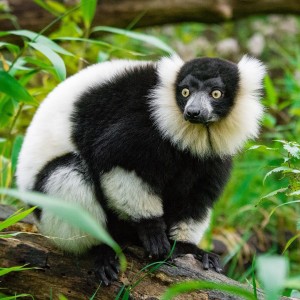 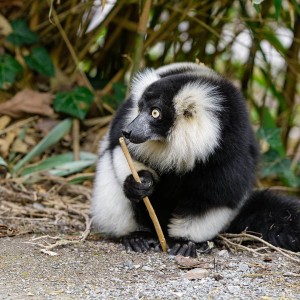 Black-and-white ruffed lemurs live in eastern Madagascar, in primary and secondary lowland, as well as a mid-altitude rainforest. They are tree dwellers and are the most arboreal of the true lemurs. 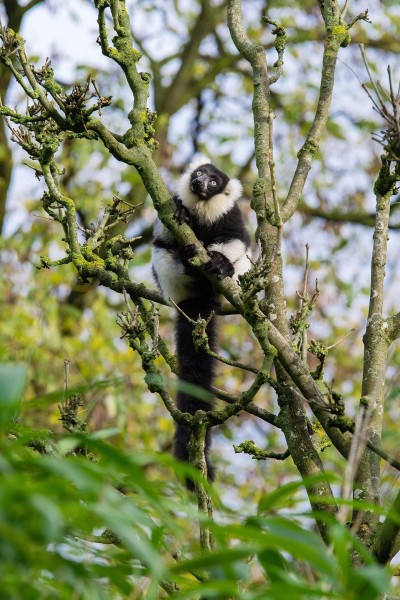 Black-and-white ruffed lemurs live in groups of 2 to 5 individuals. In some parts of Madagascar, up to 16 individuals form a group, although they divide into smaller subgroups in the cool wet season. The subgroups use different parts of the home range. The females seem to provide a stable basis for the bigger groups. These lemurs spend most of their day traveling, feeding, and resting high in the forest canopy. As they are diurnal, their most active time is mornings and late afternoons. Black-and-white ruffed lemurs, when threatened, defend themselves and their territory (which they have marked with scent) with a near-deafening call. Aside from vocalizations, they also use facial expressions and body postures to communicate. Tactile communication, through grooming, aggression, and play, is also important.

Black-and-white ruffed lemurs have a highly frugivorous diet, with fruit making up 92% of their overall diet. Smaller percentages of leaves, nectar, seeds and even fungi make up the remainder. Their diet is also influenced by the seasons, with certain plant parts and fruits only ripening or becoming available during certain times of the year.

The mating system of the Black-and-white ruffed lemurs is little understood. They usually live in what seem to be family groups, based on one mated pair, which indicates the species is monogamous. However, due to variation in the social structure, where larger groups are sometimes formed, it is possible that some populations are polygynous (one male mating with multiple females). The mating season appears to be in June and July. The period of gestation is usually 90 to 102 days. A mother may have up to 6 babies at a time but usually has only 2 or 3. More than 50% of births are twins. A mother can use her mouth to carry the infant, which is obviously different from most lemurs, whose infants cling to the mother's belly when young, then ride on her back as they get heavier. Infants may leave the nest at 3 weeks and are as mobile as their parents by the time they are 7 weeks old. At about 4-5 months old weaning takes place, and infants are almost adult size at 6 months old. Both males and females reach reproductive maturity between the ages of 1.5 and 3 years, although breeding is not necessarily successful during the first year of maturity. The Black-and-white ruffed lemur is under threat by habitat loss as a result of logging, mining, agriculture, and other development. When human activities in Madagascar encroach upon the rainforest habitat, this lemur species is one of the first lemur species to disappear. Being hunted for meat is also a threat to this rare primate, as unfortunately its daylight activity pattern and large size make it an easy target. It is one of the most heavily hunted lemur species in the country.

According to the Primate Info Net (PIN) resource, the total population number of the Black-and-white ruffed lemur is 1,000 to 10,000 individuals. Today this species' numbers are decreasing and it is classified as Critically Endangered (CR) on the IUCN Red List.

As a frugivore, the Black-and-white ruffed lemur plays a big role in the dispersal of seeds. As prey, they may also have an impact on local food webs.