The Black crowned crane is covered with plumage that is black or nearly black. The wings have white and gold sections, and there are red and white patches of skin on the face behind the eye. Under the head is a small gular pouch that can produce booming noises when inflated. On top of the head is a golden crown. The bird's eyes are brown and its legs and feet are black. The young bird is greyish-brown with a brown nape and crown. Its crest is smaller in size than the adult's. The upper parts have rufous-edged feathers. It is a stately, elegant bird. 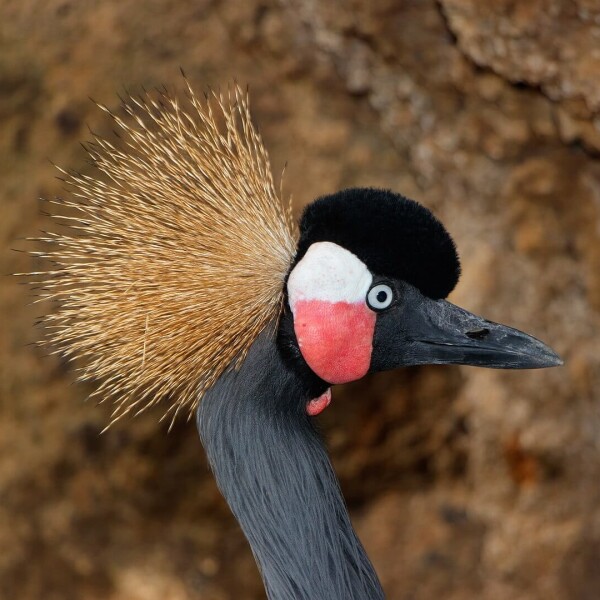 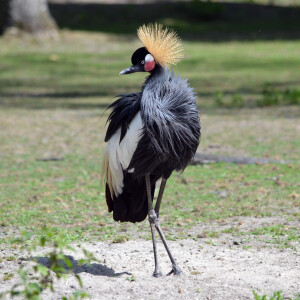 Black crowned cranesmake their home in the savannah of sub-Saharan Africa, from Sudan and Ethiopia in the east, over to the west coast including Senegal and Gambia. They live in shallow wetlands and mixed grasslands and often frequent flooded wetlands, wet croplands, rice fields, and upland fields in West Africa. In East Africa, these birds prefer wet areas, such as wet meadows, large marshes, freshwater lakes, and rivers. 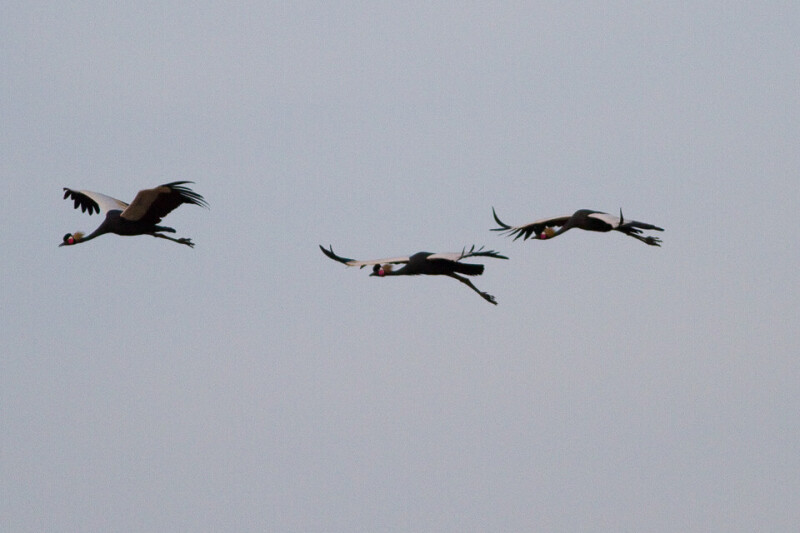 Black crowned cranes generally live in a defined area, but will fly on a daily and seasonal basis for several dozen kilometers. In the dry season (non-breeding time) large flocks of as many as several hundred birds are formed. During the breeding season, a single pair nests within territories of 0.5-1 square kilometers. Primarily diurnal, they sleep at night while standing on one or other leg, preferably in the water. Black crowned cranes usually feed in the mornings and afternoons, with plenty of time for other activities. They spend much time preening, as do all birds. Black crowned cranes look for food singly, in pairs, or with a small group. They peck on the surface rather than digging into the soil. During drier spells, they tend to feed near livestock, where invertebrates are in abundance. Black crowned crane vocalization is characterized as generally low-pitched and mellow “honk” and “ka-wonk ka-wonk ka-wonk” expressions.

Black crowned cranes are omnivores and will eat anything small enough that they can catch, including snails, insects, crabs, lizards, amphibians, and snakes. They also eat seeds and fruit.

These cranes are monogamous and form a bond with their mate for life. During the mating season, the birds perform beautiful courtship displays with accompanying calls, starting with mutual repeated bowing. They then spread their wings to hop, run and jump up into the air, their legs dangling. They may preen each other. The breeding season lasts from July until October, in accordance with the rains. The female lays 2-3 eggs. The parents take turns incubating the eggs for about 28-31 days, with the female's turn being mainly during the night, while both parents have turns during the day. Soon after hatching the chicks go with their parents to feed nearby. They are able to fly 60 to 100 days later. The biggest threat to Black crowned cranes is the degradation and loss of their wetland habitats due to drainage of wetlands and conversion for agriculture, excessive grazing, drought, fire, agricultural and industrial pollution, oil exploration, and dam construction. This crane is also threatened by the illegal hunting by locals and pet trade.