Blue jays are small colorful birds native to North America. They are predominantly blue in color with a white chest and underparts, and a blue crest; they have a black, U-shaped collar around the neck and a black border behind the crest. Males and females are similar in plumage that does not vary throughout the year. 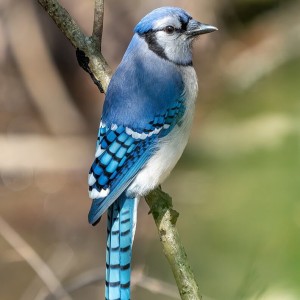 Blue jays occur from southern Canada and throughout the eastern and central United States south to Florida and northeastern Texas. They reside through most of the eastern and central United States, although western populations may migrate south. Blue jays live in a variety of habitats within their large range, from the pine woods of Florida to the spruce-fir forests of northern Ontario. They prefer mixed woodlands with oaks and beeches. These birds have also adapted to human activity and can often be seen in parks and residential areas. 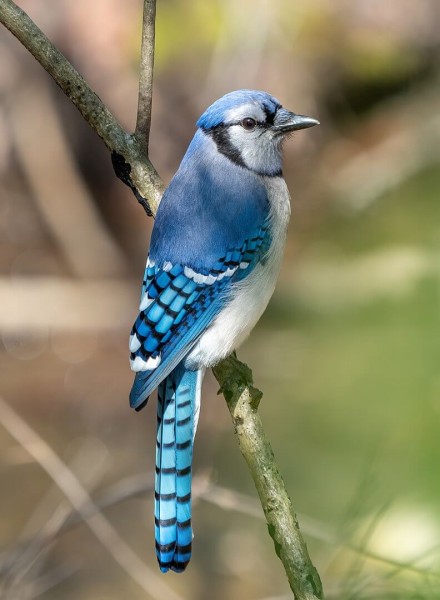 Blue jays are noisy, bold, and aggressive birds. They are very territorial and will chase others from a feeder for an easier meal. Additionally, Blue jays may raid other birds' nests, stealing eggs and chicks. When they are alarmed or angry, the blue crest atop their head will rise and it will lower when the birds are relaxed or calm. Blue jays have strong black bills which they use for cracking nuts, usually while holding them with their feet, and for eating corn, grains and seeds. They feed both on the ground and in trees and will sometimes cache food to eat later. Much about the migratory behavior of Blue jays remains a mystery. Some are present throughout winter in all parts of their range while the northernmost populations are migratory. Blue jays usually migrate during the day, in loose flocks of 5 to 250 birds. Young birds may be more likely to migrate than adults, but many adults also migrate. Some individuals migrate south one year, stay north the next winter, and then migrate south again next year. Blue jays can make a large variety of sounds, and individuals may vary in their calling style. Their most commonly recognized sound is the alarm call, which is a loud, almost gull-like scream. There is also a high-pitched 'jayer-jayer' call that increases in speed as the bird becomes more agitated. Blue jays will use these calls to band together to mob potential predators such as hawks and drive them away from the jays' nests.

Blue jays are omnivores and feed on both plants and animals. Their diet includes acorns, nuts, weed seeds, grain, fruits, and other berries, bread, meat, small invertebrates of many types, scraps in town parks, bird-table food, and rarely eggs and nestlings.

Blue jays form monogamous pair bonds for life. The breeding season begins in mid-March, peaks in mid-April to May, and extends into July. Blue jays are not very picky about nesting locations. If no suitable tree or large bush, they will even use places like the large mailboxes or occupy nests of other mid-sized songbirds as long as these are placed in suitable spots. The nest is usually built at a height in the trees of 3-10 m (9.8-32.8 ft). It is cup-shaped and composed of twigs, small roots, bark strips, moss, other plant material, cloth, paper, and feathers, with occasional mud added to the cup. Both sexes build the nest and rear the young, though only the female broods them. The male feeds the female while she is brooding the eggs. There are usually between 3 and 6 eggs laid and incubated over 16-18 days. The chicks are altricial; they are hatched naked, helpless, and with their eyes closed. The young usually fledge between 17-21 days after hatching and may remain with their parents for one to two months. They become reproductively mature after one year of age. There are no major threats to Blue jays at present.

According to the What Bird resource, the total population size of the Blue jay is 22,000,000 birds. According to tot the All About Birds resource the total breeding population size of the species is around 13 million individuals. Overall, currently, Blue jays are classified as Least Concern (LC) on the IUCN Red List and their numbers today are stable.

Blue jays often hide seeds and nuts for later; they burrow them into the soil and sometimes forget about them thus helping to disperse seeds throughout their ecosystem.