The Common eland, along with the Giant eland, is one of the biggest antelopes in existence. Despite this, it has enough endurance to trot for an indefinite period and is able to jump from a standstill over an 8-foot fence. Males and females both have horns that form a tight spiral, though females' horns are generally longer and thinner. Usually a fawn or tawny color, elands become gray or bluish-gray when they get older, and the oldest animals are almost black. Males have a tuft of black hair growing out of their prominent dewlap, the fold of loose skin hanging from their neck. Adult males also possess a mat of hair on their forehead that becomes longer and denser as they get older. 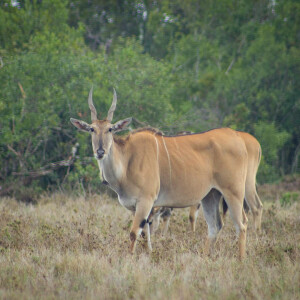 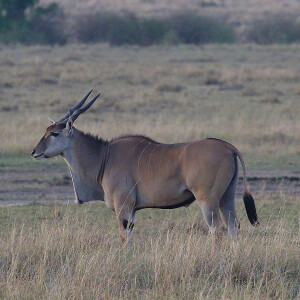 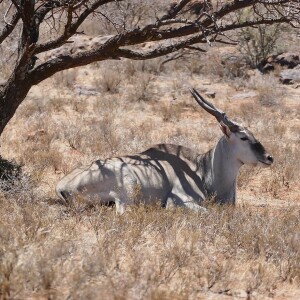 Common elands inhabit southern Africa and the foothills in the great southern African plateau, as well as Ethiopia and most of the arid zones in South Sudan, as well as western Angola, Namibia, and South Africa. They prefer to live in semi-arid areas that contain many shrub-like bushes, and often inhabit woodlands, bush, and mountaintops. Elands typically avoid forests, swamps, deserts, and open grasslands but do occur in grassland with good herb cover. Common elands are crepuscular and are most often found feeding at night, when vegetation has taken in moisture from the air, thus providing a higher water content. When it is hot during the day, they will often be found resting in areas of shade. Common elands are social animals, often found in herds of 25-60, occasionally gathering in groups of more than 1,000, especially during the rainy season. Typically, mature males form herds, and mature females do as well, with the young congregating in nursery herds. A hierarchy exists within these herds, which determines, for a male, access to breeding females, and to feeding sites for a female. Common elands are nomadic creatures. Males are not territorial, though will become possessive with regard to breeding females. The home range of a female, which makes extensive movements in the wet season, is much bigger than that of a male. Male territories are mostly in wooded areas. If a predator is seen, the bull of a group will bark and start walking back and forth to warn other elands of danger. They also use the odors in their urine to communicate.

Common elands are herbivorous (folivorous, graminivorous) animals. They browse during drier winter months but have also adapted to grazing during the rainy season when grasses are more common. They require a high-protein diet of succulent leaves from flowering plants but will consume lower-quality plant material if available including forbs, trees, shrubs, grasses, seeds, and tubers.

Common elands are polygynous breeders and dominant males will mate with multiple females. Sometimes males fight with their horns. Mating may take place at any time, usually when the elands gather on the lush plains to eat the plentiful grass. Gestation is for 8.5-9 months and females give birth to a single calf, which they keep hidden in vegetation until it is two weeks old. Calves grow very quickly, feeding on the nutritious eland milk, soon joining a nursery herd that remains close to the herd of females. Most of the time calves are concealed or moving around along with their mothers. Weaning takes place after 6 months and the calves stay for as long as two years within their calf group. After this, they go off to join a female or male herd. Reproductive maturity is reached by females when they are one to three years old and by males when they are the age of four to five years. Habitat loss as a result of expanding human settlements and being poached for its high-quality meat have meant drastic reductions in the range and numbers of the Common eland.

According to the IUCN Red List, the total Common eland population size is around 136,000 individuals. Currently, this species is classified as Least Concern (LC) and its numbers today remain stable.