The Eastern gorilla is the largest primate in the world. As compared with other gorillas, the Eastern gorilla has a smaller nose, shorter arms, longer hair as well as larger jaws and teeth. Mature males are often called silverbacks due to a large patch of hair on their backs, which is silver or grey in color. In addition, males have sharp and large canine teeth. When under stress, apocrine glands in the armpits of females emit a strong smell. The arms of the Eastern gorilla are long and muscular, the head is huge and the legs are short. The silky and long coat of this primate varies from blue-black to brownish grey. 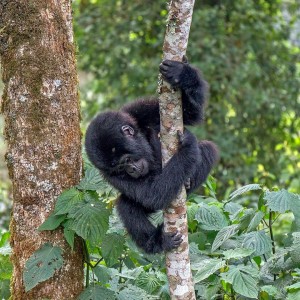 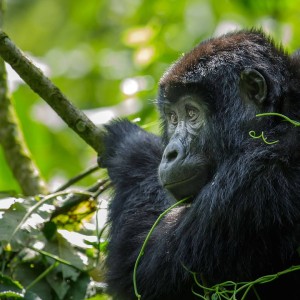 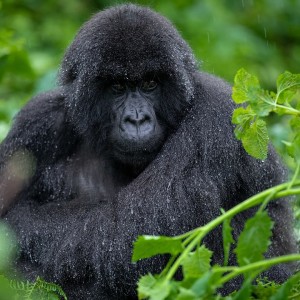 They are diurnal, spending 40% of the day resting, 30% traveling, and another 30% - feeding. They rest and sleep in nests, placed on steep slopes, in trees, or on the ground. Eastern gorillas gather in social units called harems, which contain a male and females with their young. Gorilla harems are not territorial, though conflicts and encounters can happen, particularly when a lone male gets into contact with members of the harem. Grooming is a common activity for these gorillas, usually occurring between males and females as well as among females. These animals are very calm, and care for their babies, forming strong bonds within the group. Eastern gorillas use a wide variety of communication forms, interacting with each other or warn intruders to keep away.

Eastern gorillas are folivores, feeding mainly upon leaves, roots, stems, vines, shrubs, bamboo as well as pith of herbs. They also consume flowers, fruit, berries, fungi, wood, the bark of trees, and epithelium, which is stripped from roots. In addition, these primates will sometimes eat invertebrates.

These animals have polygynous mating system with the dominant male of the group having the exclusive right of mating with all females of the group. The Eastern gorillas mate all year round. The gestation period lasts 8.5 months, yielding a single, dependent baby. The infant is carried by its mother, able to crawl only at 9 weeks old and starting to walk at the age of 30-40 weeks. The mother breastfeeds the young for about 1 year, though weaning often occurs no sooner than 3 years old. After weaning, the young continue living with their mother for another year. Female gorillas reach reproductive maturity at 10 years old while males don't breed until they are at least 15 years old. 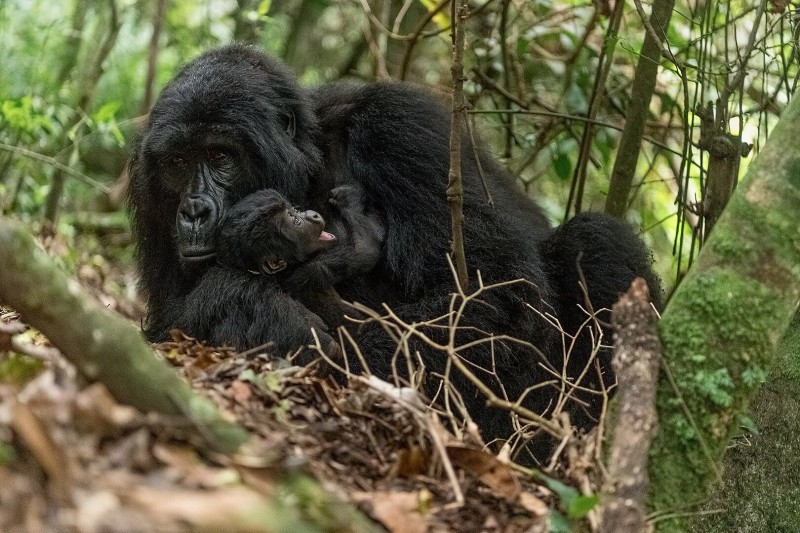 Poaching is among the major threats to this species’ population. The Eastern gorillas are poached for their body parts while juveniles are captured by zoos and private collectors. Another notable threat is the civil war in the region, which has caused a number of fatal accidents. Tourism, which so far supported the survival of the Eastern gorillas, has recently become a threat due to a large number of people coming into contact with these animals and thus putting them at risk of catching a human disease.

According to IUCN Red List, the total population size of the Eastern gorilla is fewer than 5,000 individuals. Currently, this species is classified as Critically Endangered (CR) on the IUCN Red List and its numbers today are decreasing.