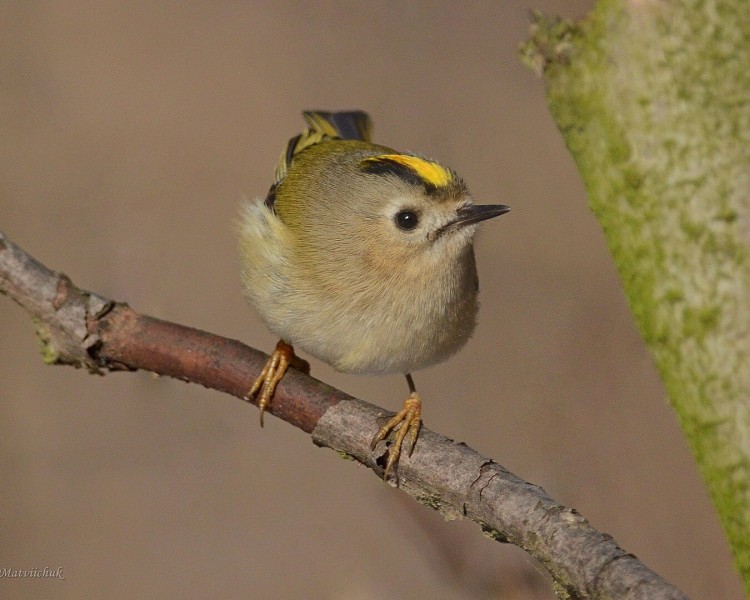 The goldcrest is one of Europe’s smallest songbirds. Its English and scientific names come from its colorful golden crest feathers, and are also possibly the reason it is known in European folklore as "king of the birds". The tiny goldcrest is a dull grayish-green, on its head, there is a black and yellow stripe, with an orange center in adult males, and its belly is pale. Its thin beak is perfect for picking out insects from between pine needles. 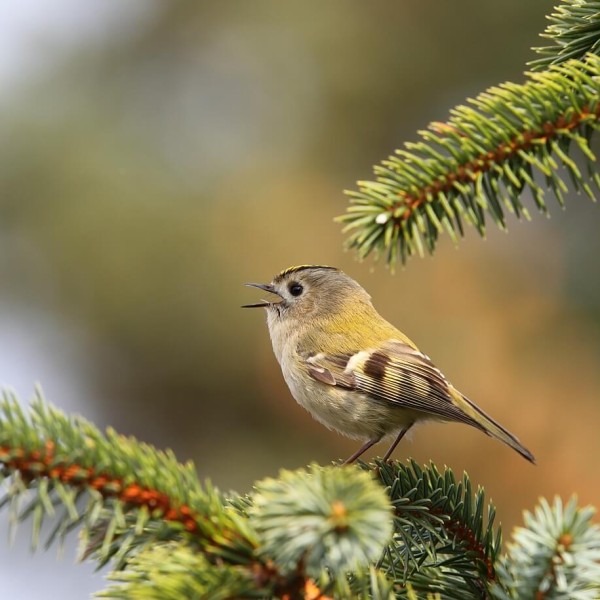 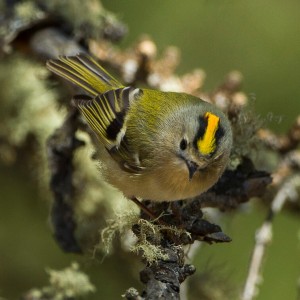 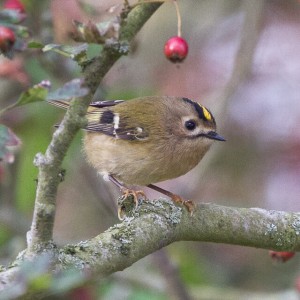 Goldcrests breed in Britain and Ireland, across Europe, and southern Siberia, as well as parts of central Asia and Japan; northern populations head south for winter. They are partly migratory; birds in the north move to the south in winter, traveling sometimes about 1,000 km within a week. Breeding takes place in areas of conifer and mixed woodlands, and large gardens and parks that have conifers. Outside of the breeding season, they may live in deciduous trees and scrub. 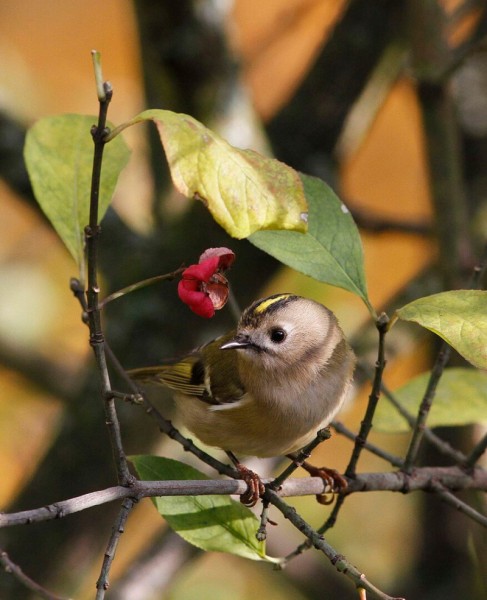 The goldcrest is a diurnal and hyperactive bird with very fast-whirring wings, hopping and jumping among twigs and branches in a jerky, fairly frenetic fashion, somewhat like a wren. When hidden amongst dense conifers, it may reveal its presence by its high-pitched 'zi-zi-zi' call, though this is beyond the hearing range of most humans. These birds forage into foliage and probe into bark crevices with their pointed bill, often hanging upside down or flittering to gather insects from the underside of leaves. They are often to be seen in small groups. In winter, goldcrests display erratic behavior, joining sedentary groups of birds of their species. They will fly long distances, although bad weather can put a stop to their migration. During harsh winters, they feed all day, roosting together at night within dense vegetation, very close together.

Goldcrests are mainly insectivores, they eat small insects and spiders that they find in trees. During winter, they eat seeds and insects from the ground. The young grow quickly, having a rich diet that includes small spiders and insect larvae.

Goldcrests are monogamous breeders. This means that both the male and the female have only one partner. Courtship displays begin in late April or early May. The sedentary male sings to establish his territory and attract females, displaying his bright orange crest to his mate. Higher conifers can contain several breeding pairs at different levels of the trees, so several territories can exist in the same tree. The nest is on the outer branches of the tree, is hammock-shaped, and built mainly by the male. 9 to 12 smooth pale eggs with several markings are laid, one per day. Incubation is for about 16 days, by the female, starting before all eggs have been laid. The female broods and cares for the chicks during the first seven days. The male feeds the female at the nest and both adults will feed the chicks, which fledge at around 17 to 22 days. Goldcrests are common across most of their range. The only significant threat is a natural one: in severe winters many birds die if cold temperatures last too long, but the populations are able to recover within several years.

According to the IUCN Red List, the total goldcrest population size is estimated at 98-165 million mature individuals. The breeding population within Europe is estimated to be 20 million - 37,000,000 pairs, with 40,100,000-74,100,000 mature individuals. According to the Royal Society for the Protection of Birds (RSPB) resource, the wintering population size of the species in the UK is 3-5 million birds. Overall, currently, goldcrests are classified as Least Concern (LC), but their numbers today are decreasing.