The Gray jay is a fairly large songbird that lives in the boreal forests of North America. It has pale grey underparts, darker grey upperparts, and a grey-white head with a darker grey nape. These birds live year-round on permanent territories, surviving in cold winter months on food cached throughout their territory in warmer periods. They also adapt to human activity in their areas and approach humans for food, inspiring a list of colloquial names including "lumberjack", "camp robber", and "venison-hawk". Gray jays are social and often seen in small family groups that consist of 2 to 4 birds. They are active during the day spending time flying around their territory, hopping or walking on the ground in search of prey, caching (hiding) food, perching, and sunbathing. Gray jays often hunt nestling birds which they take more often from nests in trees rather than on the ground. They find nestlings by moving from perch to perch and scanning their surroundings. When feeding, Gray jays wrench, twist, and tug food apart, unlike other jays (such as the Blue jay), which grasp and hammer their food. They also commonly carry large food items to nearby trees to eat or process for storage, possibly as a defense against large scavengers. To communicate with each other, Gray jays use a whistled 'quee-oo', and various clicks and chuckles. When predators are spotted, the birds produce a series of harsh clicks to signal a threat on the ground, or a series of repeated whistles to indicate a predator in the air.

Gray jays are omnivores and scavengers. They hunt such prey as arthropods, small mammals including rodents, and nestling birds. They may also opportunistically hunt young amphibians such as the western chorus frog and the long-toed salamander. Carrion, fungi, fruits such as chokecherry, and seeds are also eaten.

Gray jays are monogamous; pairs remain together for life unless one of the partners dies. Breeding takes place during March and April. Gray jays exhibit cooperative breeding and during the nest-building period, pairs are accompanied by 1 or 2 juvenile birds. The role of juveniles is in allofeeding (food sharing) by retrieving caches and bringing food to younger siblings; however, this is only allowed by the parents during the post-fledgling period. Until then, parents will drive the other birds away from the nest. Gray jays build their nests and lay eggs in March or even February when snow is deep in the boreal forest. Males choose a nest site in a mature conifer tree and take a lead role in construction. Cup-shaped nests are constructed with brittle dead twigs pulled off of trees, as well as bark strips and lichens. Insulation is provided by cocoons of the caterpillar filling the interstitial spaces of the nest, and feathers used to line the cup. A clutch consists of 2 to 5 light green-grey eggs with darker spots. Incubation is performed only by the female and lasts an average of 18 days. The female is fed on the nest by her partner; she rarely moves from the nest during incubation and for several days after hatching. The chicks are altricial; they are hatched helpless and with their eyes closed. They leave the nest between 22 and 24 days after hatching and reach full adult measurements after 55 to 65 days; at this time they battle among themselves until the dominant juvenile forces its siblings to leave the natal area. The dominant bird remains with its parents until the following season, while its siblings leave the natal territory to join an unrelated pair who failed to breed. Gray jays become reproductively mature at two years of age. 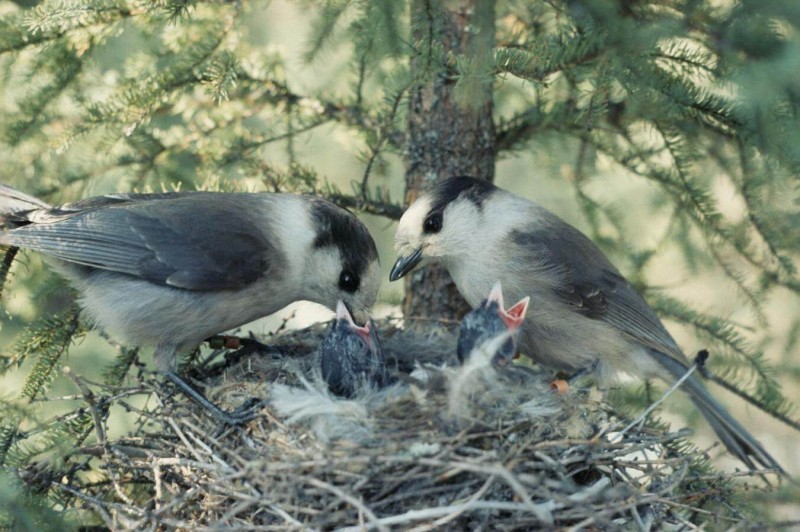 Gray jays are not considered threatened, however, a declining population at the southern end of their range linked the decline in reproductive success to warmer temperatures in preceding autumns. Such warm temperatures cause stored food items of Gray jays to spoil upon which success of late winter nesting partly depends.

According to the IUCN Red List, the total population size of Gray jays is 26,000,000 mature individuals. Currently, this species is classified as Least Concern (LC) on the IUCN Red List and its numbers today are decreasing.