This tiny rodent is the smallest and most commonly found chipmunk throughout North America. The long and narrow tail of the Least chipmunk is narrow but very bushy. Twice a year, the animal undergoes a molting period, regaining its soft and dense fur. The fur of this chipmunk is brighter during the summer months and greyish in winter. The short ears are covered in short hairs. The Least chipmunk has pouches on its cheeks, serving as food stores. Males of this species are a bit smaller than females. As compared to other chipmunks, the Least chipmunk is considerably smaller, having a long tail. It is also distinguished by bands, stretching through its body towards the tail base. When running, the Least chipmunk raises its tail, holding it vertically instead of extending it back. 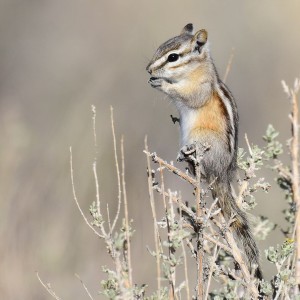 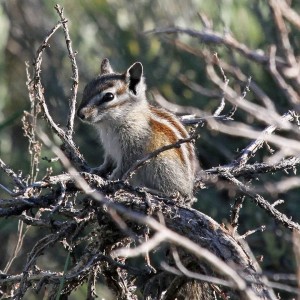 Endemic to North America, these rodents are found in Canada - from Yukon and British Columbia to Quebec; U.S. - New Mexico, Arizona, and California in the south as well as Wisconsin, Michigan, and Minnesota in the east. The Least chipmunk is commonly found in sagebrush habitats and coniferous woodland, and along rivers, but it also occurs in alpine meadows, and on the edges of the northern tundra Least chipmunks are generally solitary animals, socializing only when mating or raising offspring. They are diurnal animals that are most active in April and October. These highly territorial rodents are known to defend their nesting sites against intruders. Nests of the Least chipmunks are constructed depending on the season of the year. Thus, the summer nests are made out of leaves and bark and located in rotting logs or tree cavities. On the other hand, the winter nests are built of dried grass, bark, fur, feathers, and soft plant material, situated in underground burrows. They spend their winter months in these burrows, being in a state of torpor until spring while relying on food supplies that they collect in advance. As compared to other squirrels, these rodents may occasionally wake up during their hibernation period in order to eat. The primary forms of communication are auditory signals and body posture. Vocalizations are used to pronounce their presence on a territory as well as when looking for mates or threatened.

There is very little information on the reproductive system of this species, although males are known to wake up from hibernation earlier than females to compete for their mating rights. Hence, the Least chipmunks could be either polygynous, where each male has multiple mates, or polygynandrous (promiscuous), where individuals of both genders have numerous mates. By April-May, females wake up from hibernation and the mating season begins. The gestation period lasts 30 days, yielding a litter of 2-6 babies. Females usually produce one litter per year. However, another one can be yielded when the previous litter is lost. The newborn babies are pink in color. They are born naked and with closed eyes, which open only at 28 days old. The young chipmunks attain their complete fur at 40 days old. Mothers are very attentive to their offspring, protecting and caring for them until the babies are weaned after 60 days old. The age of reproductive maturity of this species is 10 months old. Least chipmunks are mainly threatened by the loss of their natural habitat as a result of encroachment. In addition, the species is presently hunted and trapped.

According to IUCN, the Least chipmunk is common and widespread throughout its range but no overall population estimate is available. Currently, this species is classified as Least Concern (LC) and its numbers remain stable.

Due to their hoarding habit, these rodents carry seeds and nuts of various plants, thus acting as key seed dispersers of this species. In addition, they are prey items for local predators.