Mantled guerezas are divided into several subspecies, each of which exhibits a unique appearance. However, all of these sub-species have characteristic mantles - long, white colored fringe of fur, stretching across both sides of the trunk, giving these animals their common name, Mantled guerezas. These primates are black-and-white colobuses, belonging to the group of Old World monkeys. A frame of white colored hairs surrounds their face. On their tail, they display a conspicuous, white tuft. And finally, these animals differ from all other Old World monkeys by having a reduced thumb and lacking pouches on their cheeks. 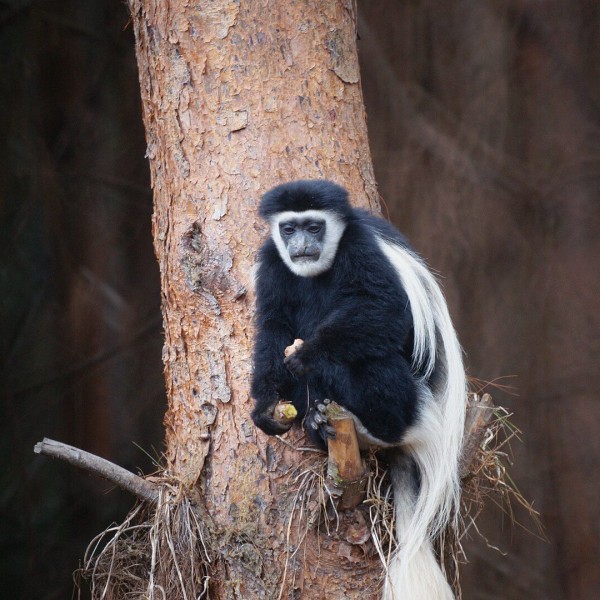 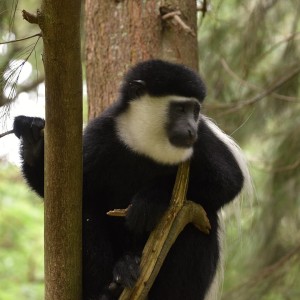 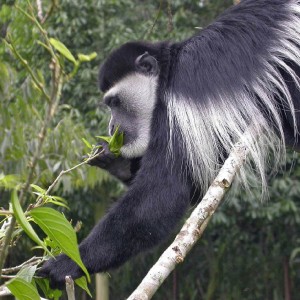 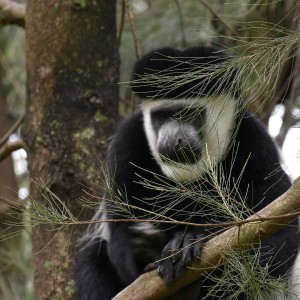 The natural range of this species occupies Equatorial Africa, stretching from Nigeria and Cameroon eastwards to Ethiopia, Kenya, Uganda, and northern Tanzania. The Mantled guerezas are generally found in forest and savannah woodlands as well as highland and montane forests. Overall, they inhabit deciduous and evergreen forests of their range. Other suitable types of habitat include both primary and secondary forests, more precisely, gallery, upland forests as well as riparian forests. They are typically found close to fresh or brackish water bodies such as rivers and lakes. 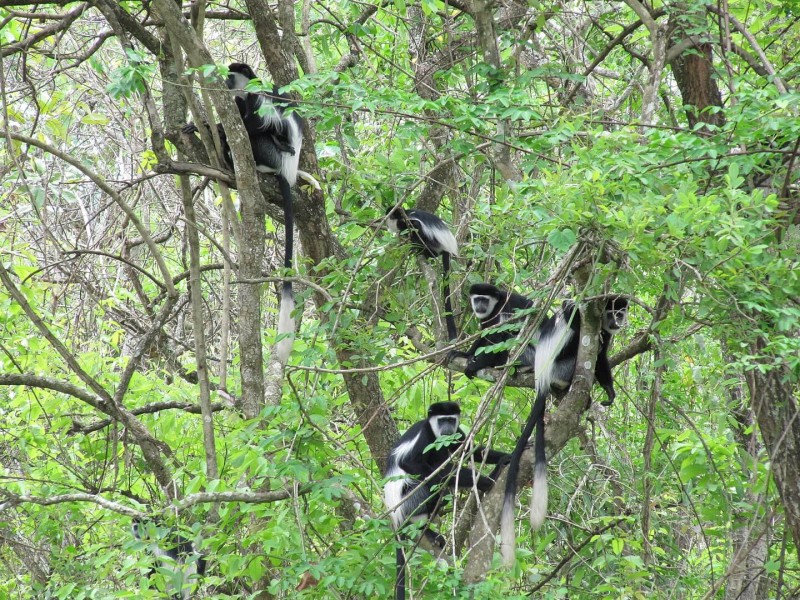 As social primates, Mantled guerezas form units of 8-15 individuals, consisting of a single adult male as well as 3-4 breeding females with their infants and juveniles. From time to time, these groups may contain up to several males, which temporarily join the group. These primates spend most of their time in trees, occasionally climbing down to find food and travel. These monkeys lead a diurnal lifestyle, spending up to 50% of the day resting. Mantled guerezas leave their sleeping sites after dawn, returning only at dusk to sleep again. Along with resting, they spend a lot of time looking for food and traveling. However, even during the active daytime hours, they usually alternate feeding and traveling activities with long periods of resting. A small remaining amount of time is typically spent grooming, greeting, playing, and watching out for predators.

Mantled guerezas are herbivores (folivores, frugivores) and their diet is generally composed of leaves and fruits. However, they have a rather diverse diet and will consume bark, wood, seeds, flowers, petioles, lianas, aquatic plants, arthropods, soil as well as occasional concrete of buildings.

Mantled guerezas are polygynous animals. A single adult male mates with a group of females otherwise called 'harem'. They don't exhibit a certain mating season but are known to breed at intervals of 20-22 months. The gestation period lasts for 158 days, yielding one baby, which is cared for and handled by the members of its natal group (primarily - females) during the first few months of its life. During this stage of development, the infant travels clung to the chest of its mother. By 20 weeks old, the young monkey will begin moving on its own. And finally, it's totally independent and weaned at 50 weeks old. Males of this species are reproductively mature at 6 years old, whereas females are able to produce offspring of their own at 4 years old. 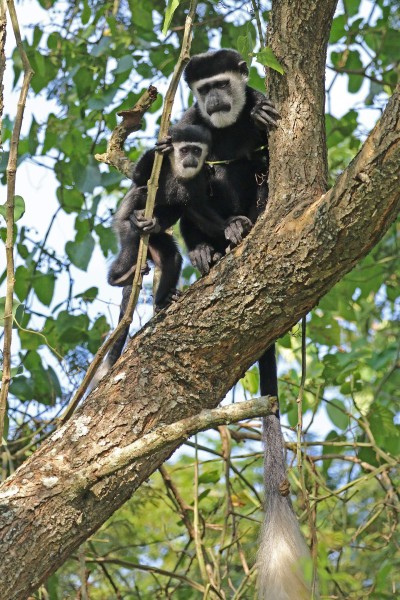 The Mantled guerezas are primarily threatened by the destruction of their habitat. These animals also suffer from large-scale hunting and capture for sale and trade: their skin serves as material for trimming coats, dresses, circular rugs, and wall hangings.

The Mantled guerezas are widespread and locally abundant. According to the New England Primate Conservancy, the total population size of the Mantled guerezas in the wild is around 2,000 individuals, including 400 monkeys in the Diani Beach area (Kenya). Currently, Mantled guereza monkeys are classified as Least Concern (LC) on the IUCN Red List.

Being herbivores, these monkeys may play an important role in the structuring of plant communities. They may also affect predator populations, as items of prey. The specially adapted stomach of these primates is sacculated and contains certain bacterial colonies, which help them digest cellulose, found in leaves, unripe fruit, and seeds that compose the major part of their daily diet. Due to this particular structure of their stomach, the Mantled guerezas occupy a unique ecological niche in the local ecosystem, which distinguishes them from many other primates.