Pied crows are widely distributed African birds. Extremely intelligent and opportunistic, they share the jackdaw’s love of shiny things. They also have a special flying ability, with broad wings that enable great powers of flight. They are curious, they are great mimics, and they use tools. 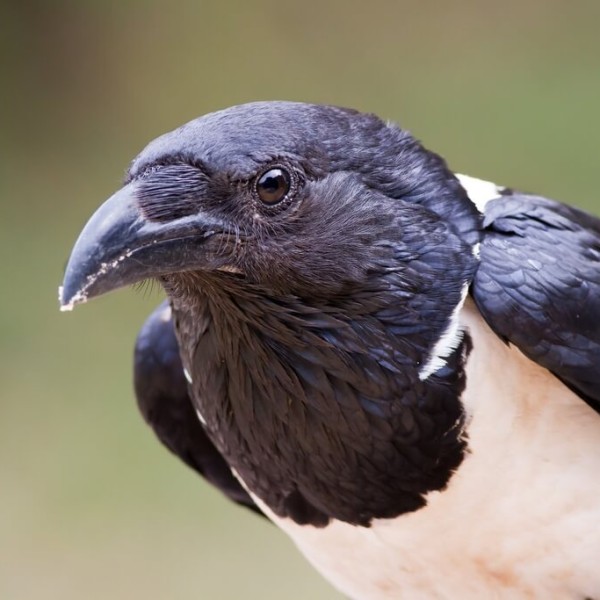 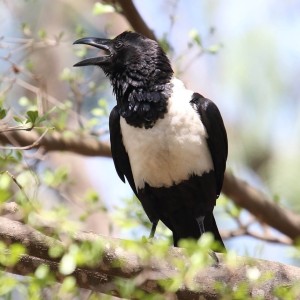 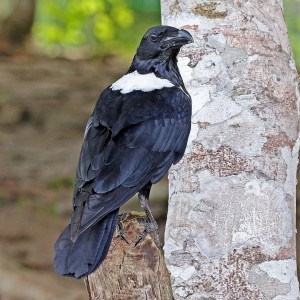 Pied crows inhabit sub-Saharan Africa to the Cape of Good Hope, Madagascar, the Comoros islands, Zanzibar, Aldabra, Pemba, and Fernando Po, living mainly in open country where there are villages and towns nearby. This species does not live in the equatorial rainforest. Pied crows are very social birds and commonly forage in pairs or small groups, but also gather in large flocks where food is abundant. They sleep in communal roosts in urban parks in large trees with many hundreds of other birds. This bird is known for mobbing bigger birds: small birds of prey up to large vultures. It may itself be mobbed by smaller birds. It will also pirate seabirds for food. This species is generally sedentary within its large range. Some seasonal or local movements occur, depending on the range. Movements have been seen after breeding: adults are probably sedentary, while the young move to new territories. The pied crow, like many crows, makes the typical guttural “kraaak” sound, or short “krow” or deeper “rrawrr”. It also makes a dry rattle “tarrrrrh” or “torrrrrh”. Other sounds are nasal, throaty, hollow, and flat, and often there is head-bobbing and movements of the tail at the same time.

Pied crows are omnivorous and eat numerous invertebrates like insects, spiders, and mollusks, as well as small vertebrates including rodents, birds and birds’ eggs, lizards, frogs, and fish. Small birds and bats may be caught in flight. Pied crows also scavenge at rubbish dumps and patrol for the roadside kill. They also eat plant materials such as seeds, roots, fruits, dates, oil palm nuts, rice, and potatoes.

Pied crows are monogamous, with pair-bonds probably lasting all their life. Courtship displays are performed at the start of the breeding season. The male struts close to and around the female, fluffing its nape and throat feathers. He also bows while he makes rattling calls. In response, the female performs a submission display, crouching and quivering her wings, which is a typical posture inviting the male to mate with her. The breeding season varies depending on the range and also the rains. These birds are solitary nesters. Both adults construct the nest, a bulky structure built from sticks and roots. Its deep cup becomes lined with mud, dung, wool, grasses, string and other material. Nests are often placed high in a tree fork, a telephone pole a, pylon, or a tall building, and rarely on a cliff ledge. 4-to 5 eggs are laid from September to November, according to the latitude. Both genders incubate but the female does most of it, over a period of 18-19 days. The parents feed and look after the young, which stay in the nest for about 35-45 days. The Pied crow has an extremely large range and may be abundant locally. It is not currently threatened.

According to IUCN, the Pied crow is widespread and common throughout its range but no overall population estimate is available. Currently, this species is classified as Least Concern (LC) and its numbers today remain stable.

Pied crows have both a positive and negative importance. Due to their varied diet, they can damage gardens and agricultural crops. On the positive side, they also eat carrion, thus helping not only humans but the entire ecosystem in which they live.