The Painted bunting is a small brightly-colored member of the cardinal family. The males are brightly colored with blue, green, red, and yellow plumage. Females and juveniles are bright green with pale rings around their eyes. The male is considered by many to be North America's most beautiful bird, and they are one of the most popular visitors to bird feeders. Due to their attractive appearance and lovely warbling song, they often live out their lives as cage birds. Habitat destruction and capture for the pet trade have meant that their numbers have decreased since the mid-1960s. 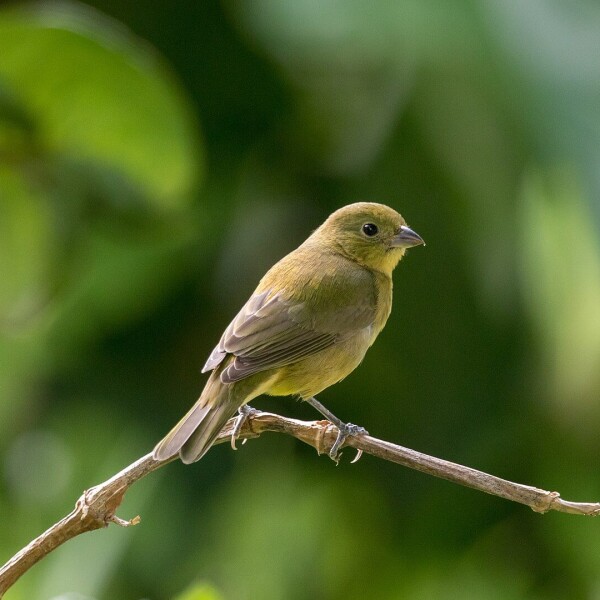 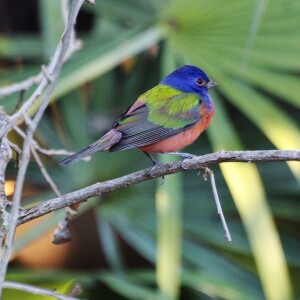 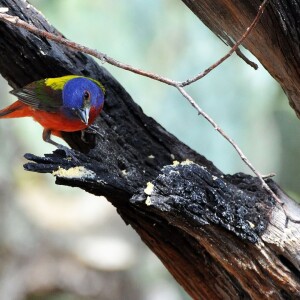 Painted buntings are divided into an eastern and a western population. The eastern population lives only in the coastal regions of northern Florida up to North Carolina. The population in the west ranges from Louisiana and Texas up to Kansas and winters mainly in Mexico and southwards to Panama, while those from the east winter in southern Florida, the Florida Keys being one of these locations, and occasionally in Cuba and the Bahamas. The western population breeds in a habitat consisting of partially open areas with scattered brush, shrubbery, and riparian thickets. The eastern birds choose scrub communities and the edges of maritime hammocks. The winter habitats are similar to each other, being tropical savanna and tropical forest margins. Painted buntings are social birds. They feed by day hopping along the ground, cautiously stopping every few moments to look around. They are shy, secretive, and often difficult to observe with the human eye, though can be fairly approachable where habituated to bird feeders. The males are frequently heard singing songs that may last 30 seconds or more, being a means of self-advertisement and/or territorial defense during the breeding season when they become highly territorial. They also engage in visual displays including flying bouncingly like a butterfly or in an upright display, body-fluff display, bow display, and wing-quiver display. Painted buntings are nocturnal migrants, and migrate over short to medium distances. Fall migration starts at the end of July and runs to mid-October, with the spring returning from early April until mid-May. The populations from the west undergo a molt in northern Mexico and southern Arizona (between their breeding and wintering habitats) before arriving at the wintering grounds in the south, in Mexico and Central America. Those from the east molt before migration travel straight to their wintering habitat in southern Florida, Cuba, and the Bahamas. When alarmed, these birds flutter frantically and utter alarm calls.

Painted buntings are herbivores (granivores) in winter and carnivores (insectivores) while breeding. They mainly eat seeds and insects, and will also feed on caterpillars, beetle larvae, spiders, grasshoppers, and snails.

This species is usually monogamous, though there is some polygyny, with a number of males taking more than one mate. During the breeding season, the birds remain on their own or in pairs. Males arrive first at the breeding habitat, one week before the females, and proceed to select and defend their mating territory. The breeding period, from late March until early August, involves various visual displays such as an upright display, bow display, body-fluff display, and wing-quivering display. The breeding season peaks between mid-May and mid-July. Nests are built in low-lying vegetation by the females, woven into surrounding vegetation for strength. A female raises two broods each season, laying 3 to 4 eggs per brood. Incubation is by the female alone and is for around 11 to 12 days. The mother feeds her altricial chicks with the male occasionally helping. The chicks fledge at 12-14 days and there is further parental care for about three more weeks. One of the biggest threats to Painted buntings is habitat loss, both its breeding grounds and migration stopover sites. They are also often a victim of collisions with windows and of cowbird parasitism. As with other colorful birds, the Painted bunting is popular as a caged bird and is frequently trapped in its wintering habitat, particularly in Mexico.

According to the American Bird Conservancy resource, the total population size of the Painted bunting is 4.5 million individuals. According to the All About Birds resource, the total breeding population size of the species is 13 million individuals, 80% of them spending at least some of their year in the U.S., while 51% are in Mexico. Overall, currently Painted buntings are classified as Near Threatened (NT) on the IUCN Red List and their numbers today are decreasing.