The Scimitar oryx is an elegant antelope once widespread across North Africa. The species went extinct in the wild in 2000. This antelope is almost white with a red-brown chest and black markings on the forehead and down the length of the nose. The white coat helps to reflect the heat of the desert. Calves of this species are born with yellow coats and lack distinguishing marks, which appear later in life. Their pelage changes to adult coloration at 3-12 months old. Both sexes have horns, but those of the females are more slender. The horns are long, thin, and symmetrical; they curve backward and can reach up to 1.2 m (3 ft 11 in) on both the males and the females. Scimitar oryx have large, spreading hooves which are well adapted for walking on the sand of their dry habitats. 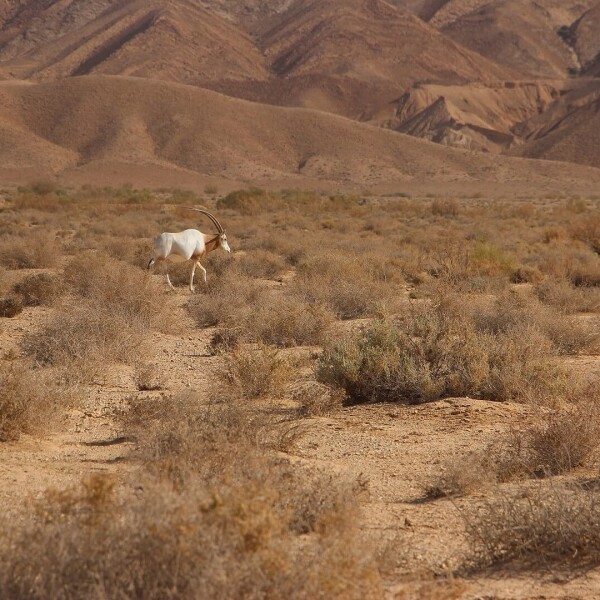 Scimitar oryx were once widespread across northern Africa. Today, they are bred in captivity in special reserves in Tunisia, Morocco, and Senegal and on private exotic animal ranches in the Texas Hill Country. Due to a reintroduction program that was launched in 2016 currently, a small herd has been successfully reintroduced in Chad. These antelopes live in grassy steppes, semi-deserts, and deserts. 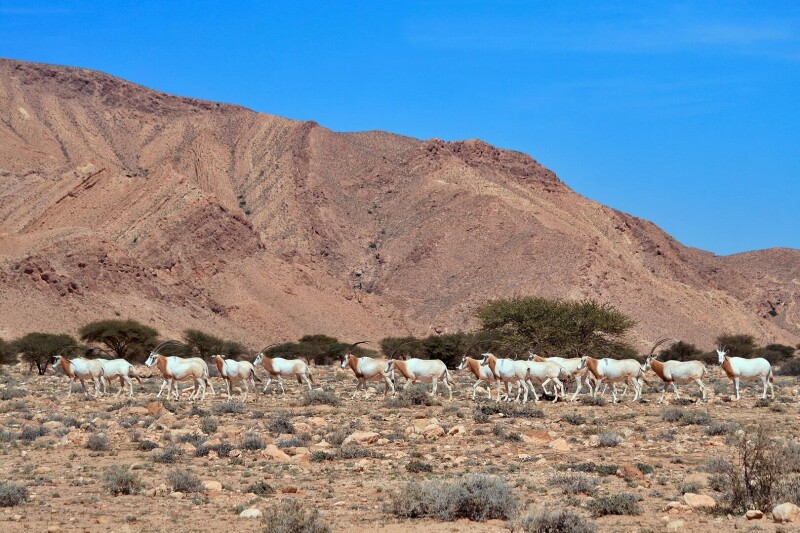 Scimitar oryx are very sociable animals and used to travel in herds of between 2 and 40 individuals, generally, led by a dominant male. They gathered in herds of several thousand for migration. During the wet season, they migrated north into the Sahara. Scimitar oryx are active both during the day and night. In the cool early mornings and evenings, they rest under trees and shrubs, or if neither are available, they dig depressions in the soil with their hooves and rest there. In the night or early morning, they often search for food. Males fight often, but not for long and not violently.

Scimitar oryx are herbivorous (graminivorous, folivorous, frugivorous) animals. They feed on foliage, grass, herbs, shrubs, succulent plants, legumes, juicy roots, buds, and fruit. Oryx can survive without water for long periods of time as they get water from water-rich plants.

Little is known about the mating system in Scimitar oryx. The breeding season usually takes place when environmental conditions are favorable. Gestation lasts about 9 months, after which a single calf is born, weighing 10-15 kg (22-33 lb). Pregnant females leave the herd for a week and both mother and calf return to the main herd within hours of the birth. The female separates herself from the herd for a few hours while she nurses her calf. Weaning starts at 3.5 months, and the young become fully independent at around 14 weeks old. Both males and females become reproductively mature at 1.5 to 2 years of age. 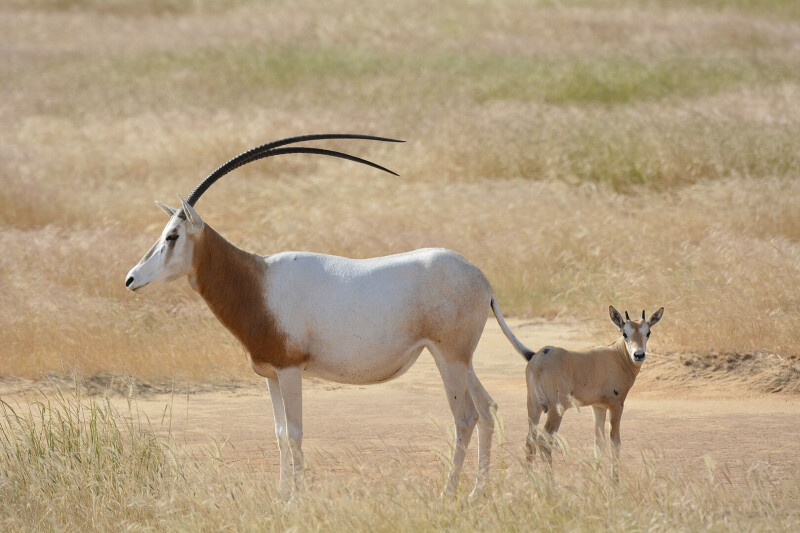 Around 7500 to 3500 BCE, the "green Sahara" became dry and the Scimitar oryx's population began to decline due to a loss of suitable habitat. Further humans hunted oryx for both their meat and horns. The northern population was already almost lost before the 20th century and with the introduction of horses and firearms during the 20th century, nomadic hunters were able to decimate the animals. The decline of the southern population accelerated as Europeans began to settle the area and hunt them for meat, hides, and horn trophies.

According to IUCN, there are estimated captive populations of Scimitar oryx in the following fenced protected areas: Tunisia - around 190 individuals; Morocco- more than 300 individuals; Senegal - around 160 individuals; Chad - around 75 individuals. Currently, this species is classified as Extinct In The Wild (EW).

In ancient Egypt Scimitar oryx were domesticated and tamed, possibly to be used as offerings for religious ceremonies or as food. They were called "ran" and bred in captivity. In ancient Rome, they were kept in paddocks and used for coursing, and wealthy Romans ate them.