The Southern cassowary is a big flightless bird that is most closely related to emus. It looks somewhat like a huge prehistoric turkey on stilts, wearing a large pointed casque or helmet. It is the second biggest bird on Earth alive today. Its name is from a Papuan word meaning ‘horned head’, a reference to the helmet made of tough skin on the top of its head. This casque slopes backward and the bird uses it to push through vegetation when running through the rainforest, head down. Its 'helmet' also reflects dominance and age. Male and female look like each other, although females are usually larger and heavier. The chicks are striped cream and black, fading to brown after about five months. Adult colors and the casque start to develop around two to four years of age 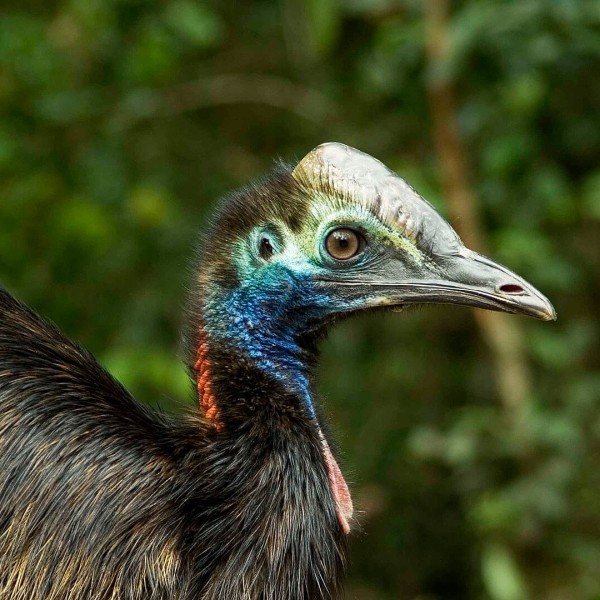 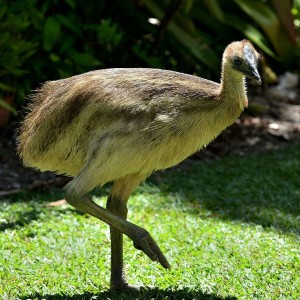 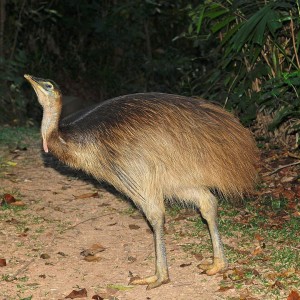 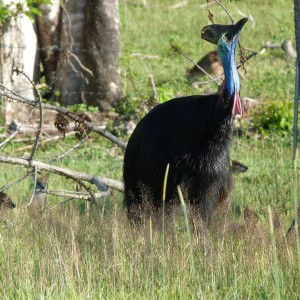 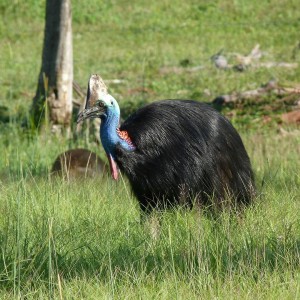 Southern cassowaries occur in New Guinea and Queensland, Australia. This bird lives in rainforests, although it can also be found in nearby mangroves, savanna, and sometimes in fruit plantations. 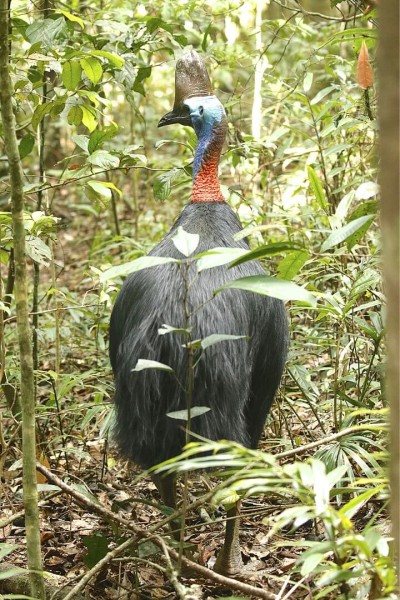 Southern cassowaries are not able to fly, having very small wings. Instead, they use their strong legs for mobility and to defend themselves. They are almost silent when walking slowly through the forest. If they are alarmed, they can crash through the forest at nearly 50 kilometers per hour, pushing vegetation out of their way with the bony casques on their heads. These birds are diurnal, they rest during the middle of the day, mainly foraging in the morning and late afternoon. They swim well and are good jumpers. This species is shy and solitary but can be aggressive, occasionally attacking humans, lashing out with their powerful legs and large claws. Being solitary, they have a home range which they defend against other cassowaries. While in the forest, they make a very loud, deep territorial roar which is able to be heard by others from a significant distance away.

These birds are polyandrous; a female mates with more than one male, and disappears straight after she has laid the eggs, starting a new nest each time. Courtship by the male consists of calling “boo-boo-boo” while inflating his throat. The breeding season in New Guinea begins when the dry season finishes and runs from June until October in Queensland. Nests are shallow depressions scraped in the ground, lined with leaves and grasses, very well camouflaged amongst the vegetation. Several clutches of 3-5 greenish eggs may be laid during the breeding season. Incubation is by the male and lasts about 50 days. Chicks remain with their father for about nine months until they become independent. Southern cassowaries are reproductively mature at about three years old. 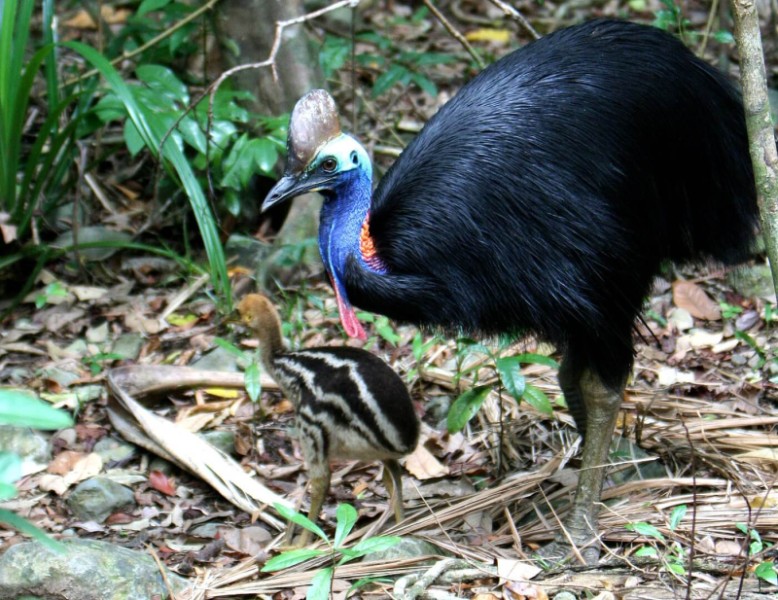 The destruction of tropical wet coastal lowland habitat and rainforest is the most important threat to the Southern cassowary population. The forest is cleared for agriculture and development, causing populations to become isolated and fragmented, reducing genetic variation. These birds also may not have access in their forest patches to sufficient food or water. Traffic accidents also kill many of these birds, particularly in Queensland, where more humans are coming to live. Humans also bring dogs, which prey particularly on young birds. Some communities in New Guinea rely on cassowaries as a food source and so heavily hunt these birds.

The main role of the Southern cassowaries in the ecosystem where they live is dispersing seeds of fruits they consume in their diet.