The Sperm whale is the largest of the toothed whales and makes many people think of the "Moby Dick" story when they see one. The name of this whale is from the huge bulbous organ containing a liquid wax called spermaceti. This wax can be heated or cooled, possibly by water drawn in through the whale's blowhole, and therefore shrinks and increases its density (assisting the whale to sink), or expands and decreases its density (assisting the whale to come up to the surface). The alternative name "cachalot" was given by early whalers and is from the Portuguese and Spanish "cachalote" from "cachola", meaning "big head". 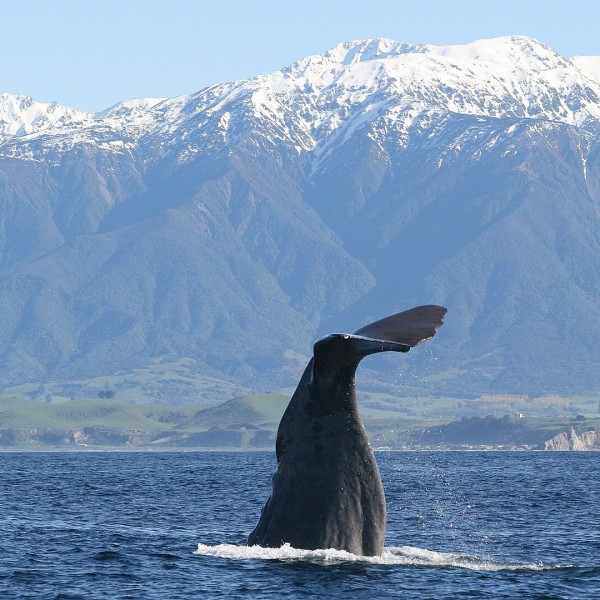 Sperm whales are among the most cosmopolitan species. They prefer ice-free waters over 1,000 meters (3,300 ft) deep. They are relatively abundant from the poles to the equator and are found in all the oceans. Although Sperm whales are usually found in deep, off-shore waters, they may also be seen closer to shore, in areas where the continental shelf is small and drops quickly to depths of 310 to 920 meters (1,020 to 3,020 ft). Grown males may even enter surprisingly shallow bays to rest (whales will be in a state of rest during these occasions). There are unique, coastal groups reported from various areas around the globe such as near Scotland's coastal waters, and Shiretoko Peninsula, off Kaikoura, in the Davao Gulf. 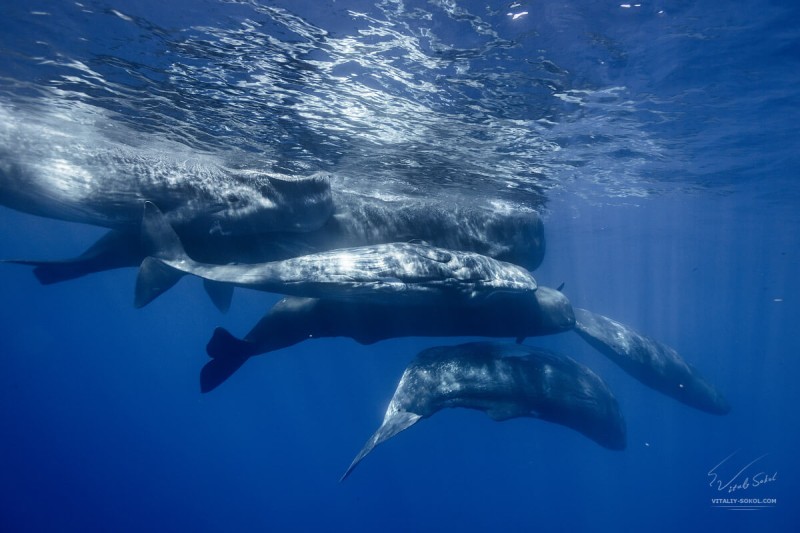 Sperm whales are very gregarious and they form groups of around 100 individuals, roughly according to age and gender. More common, however, are loose family groups of about 30 animals. Groups often consist of either "nursery schools" of juveniles and adult females, as distinct from groups of bachelor bulls. Older males are typically solitary except in the breeding season. These whales make clicking sounds for echolocation, but also use a range of other sounds such as groans, whistles, chirps, squeaks, pings, yelps, and wheezes. They also make a stereotyped, repetitive series of around 3-40 clicks when they meet another whale, known as a whale's "coda." A Sperm whale is a very deep diver and may remain underwater from 20 minutes to more than an hour. On surfacing, they usually blow 20 to 70 times before diving again. Sperm whales usually dive between 300 to 800 meters (980 to 2,620 ft), and sometimes 1 to 2 kilometers (3,300 to 6,600 ft), in search of food.[157] Such dives can last more than an hour. They hunt through echolocation. Their clicks are among the most powerful sounds in the animal kingdom and it has been hypothesized that they can stun prey with their clicks.

Sperm whales have a polygynous mating system, which means that one male mates with multiple females. During the breeding season, they form breeding schools consisting of 1-5 big males and a group of males and females of various ages. There is fierce competition among males for females (which includes battles that leave scars all over the males' heads). Spring is the peak of the breeding season. Gestation lasts for 14-16 months and one calf is born and is nursed for as long as 2 years. Groups of female whales protect their calves by means of a defensive ‘marguerite formation’, where the young are placed in the middle of the group with a circle of females around them, facing tail outwards. The cycle of reproduction occurs every 2 to 5 years in females, who mature sexually by 8-11 years of age, while males are reproductively mature at about 10 years, although they reach 25 to 27 years of age before they mate. 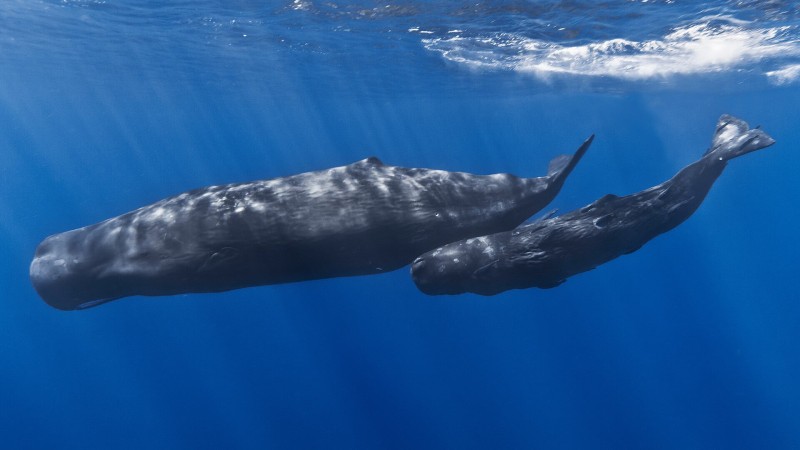 Sperm whales suffer from commercial harpoon fisheries in Indonesia, the Lesser Antilles, and Japan. Selective hunting of the biggest breeding males will probably have decreased rates of reproduction, and the loss of the largest female whales from nursery groups will have decreased the groups' survival. Further threats include becoming tangled in fishing gear, collisions with boats, underwater and anthropogenic noise, and an increasing concern as regards the habitat of whales, particularly for deep-diving sperm whales that make use of sound when feeding, communicating, and navigating in the ocean.

According to the IUCN Red List, the total Sperm whale population size is unknown, but is thought to be between 100,000-360,000 individuals. This species is classified as Vulnerable (VU) on the list of threatened species.

It has been stated that Sperm whales help fertilize the surface of the ocean by consuming nutrients in the depths and transporting those nutrients to the oceans' surface when they defecate; this effect is known as the whale pump. This fertilizes phytoplankton and other plants on the surface of the ocean and contributes to ocean productivity and the drawdown of atmospheric carbon.