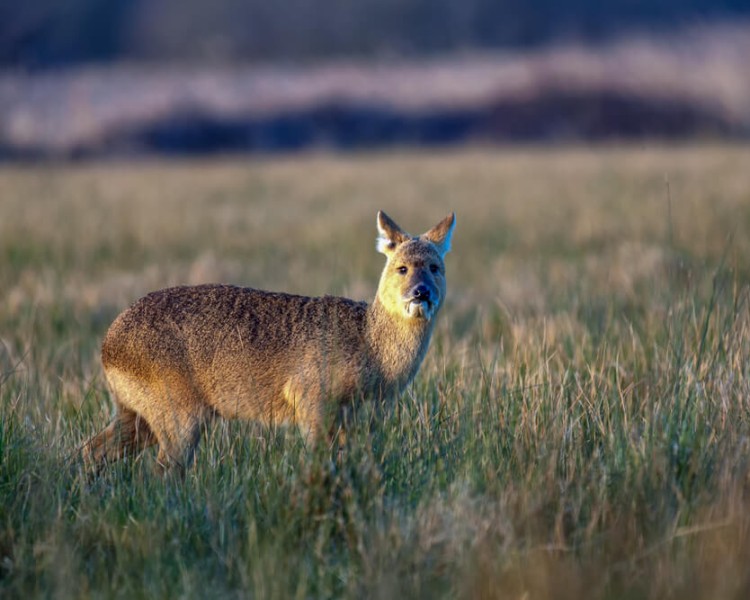 This unusual small deer has a scientific name that means ‘unarmed water-drinker’, in reference to its lack of antlers and preference for marshy habitats. In the place of antlers, males have large upper canine teeth, that, in effect, are long, slightly curved tusks which protrude like fangs out of their mouths. The female is a little smaller than the male and has much smaller canines. The Water deer's coat is rather coarse and thick, the color being reddish-brown during summer and more grayish during winter months, with whitish underparts. The young are darker brown and have white stripes and spots on the upper back. 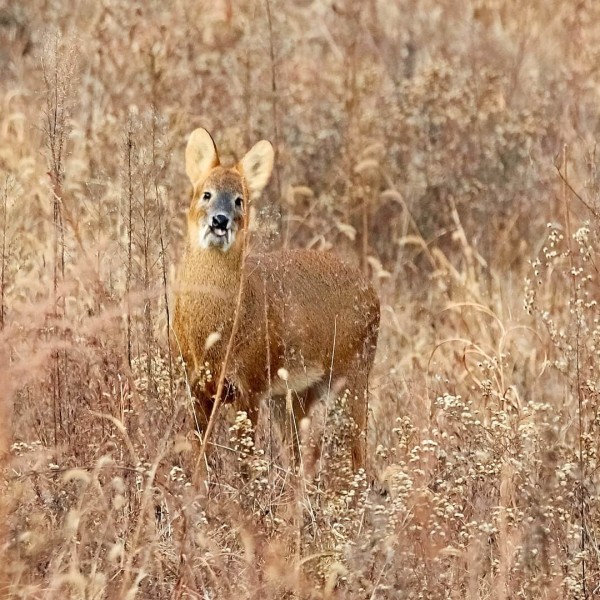 Water deer occur in east-central China in the lower Yangtze Basin and in Korea. There are also small introduced populations in Great Britain and the United States They inhabit areas with tall reeds, rushes along rivers, mountain areas, and cultivated fields in tall grass. They also occur in open grasslands and swampy areas. Water deer tend not to congregate in herds and are generally found in pairs or alone. A male will not tolerate another buck in close proximity and will defend its territory against all rivals. They will tolerate the company of a few females, which may accompany the male to seek food and rest within his territory. Water deer are most active during mornings and evenings, and during the day usually hide within dense vegetation. When disturbed, they will run with a characteristic series of leaps like a rabbit. Despite not being gregarious, these deer will alert each other to danger with brief shrill barking. The does make a soft peeping to call their fawns, and an injured deer makes a screaming wail. Water deer are able to emit several more sounds. Their main call is a bark, which is used as an alarm, and water deer will bark repeatedly at people and each other for reasons unknown. If challenged during the rut, a buck will emit a clicking sound. It is uncertain how this unique sound is generated, although it is possible by using its molar teeth. During the rut, a buck following a doe will make a weak whistle or squeak.

Water deer have a polygynous mating system; a male mates with many females inside his own territory. The mating season is from November to January, with most births from May to July, following a gestation period of 170 to 210 days. Unusual amongst deer, females may bear up to 8 young, however, 1 to 3 is more common. After the birth, a female will often leave her normal range to become solitary. Fawns spend most of their first few weeks hidden in vegetation, coming out only when their mother visits to feed them. Fawns are weaned when they are about 2 months old. Males are usually reproductively mature at 5 to 6 months of age, and females when they are 7 to 8 months old. 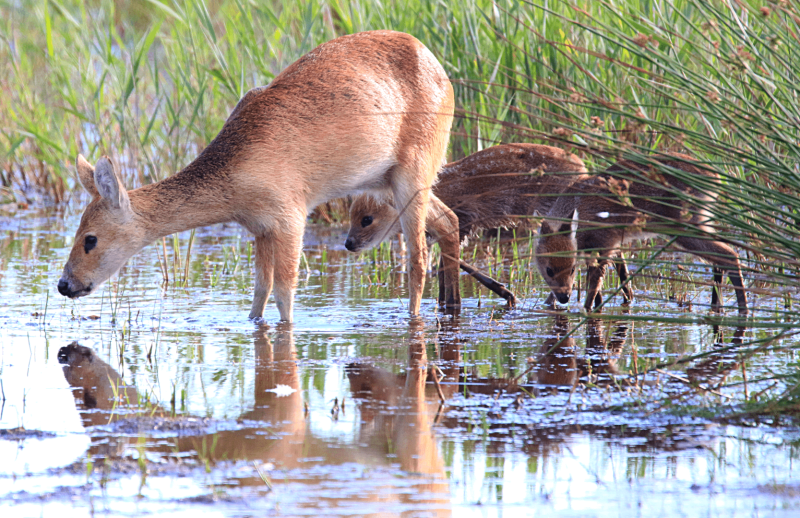 In their native habitat, Water deer are in serious decline due to habitat destruction and poaching. In some areas, they are hunted and are considered an agricultural pest, and they are also hunted for their meat and for the use of semi-digested milk from the stomachs of unweaned fawns in traditional medicine. These animals are very sensitive to environmental change, and urban development and agriculture are important threats to their habitat. Much of their original range has been lost, the distribution of Water deer is continuing to decrease, and many populations are now quite small and fragmented.

According to the IUCN Red List, Water deer in the Republic of Korea is said to be «moderately widespread», particularly along the west coast, as well as within the demilitarized zone between the two Koreas, but its population cannot be estimated. Specific populations have been estimated within China: 500-1,1000 deer in the coastal areas of Jiangsu; 1,500 deer in the Zhoushan Islands; around 1,000 deer in the Poyang Lake region, and an additional 500 individuals in Anhui. The British water deer population is about 1000 individuals. Currently, this species is classified as Vulnerable (VU) on the IUCN Red List and its numbers today are decreasing.