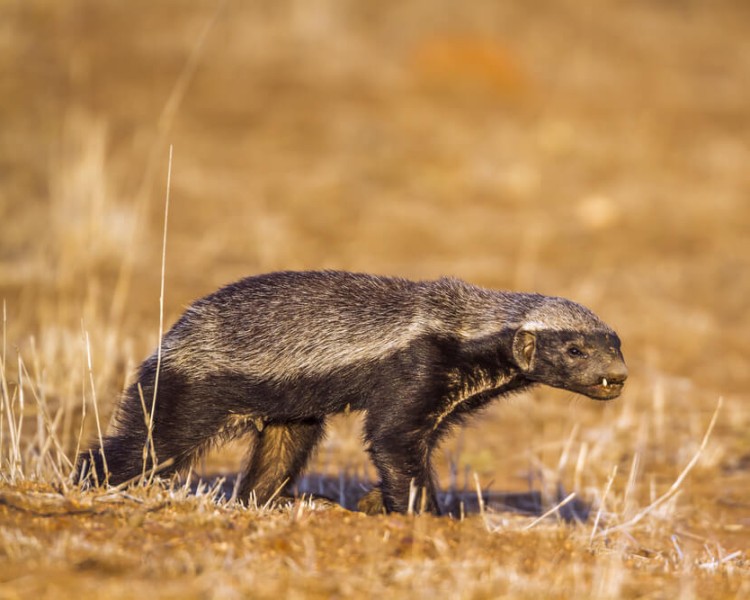 The Honey badger is a large species of the mustelid family. These animals have small eyes and large skulls. The neck and shoulders are strong and muscular. Their hind feet are small, having short claws, whereas the front feet are, conversely, strong and wide, having large claws, which help badgers in catching prey and running. Being thick and loose, their skin is extremely difficult to seize for predators. Meanwhile, it allows badgers to extricate themselves and bite the opponent. Different subspecies of the Honey badger vary in color. However, as a general rule, these animals are dark black ventrally, having the characteristic dorsal mantle, which is typically grey or bright white, extending the whole length of its body and turning to black at the base of the tail. 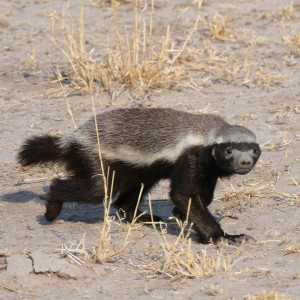 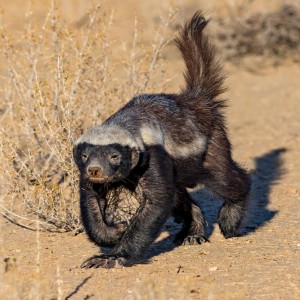 Honey badgers occur in Africa, southwestern Asia, and the Indian subcontinent. The area of their distribution covers most part of sub-Saharan Africa, stretching from the Western Cape (South Africa) northwards, reaching southern Morocco and southwestern Algeria. In Asia, the badgers are found in Arabian Peninsula, Iran as well as western Asia, from Turkmenistan to the Indian Peninsula. These terrestrial mammals are found in different environments, from tropical and sub-tropical green and riparian forest to desert; from grassland to rocky hills; from open woodland to thorn forest and arid steppe. 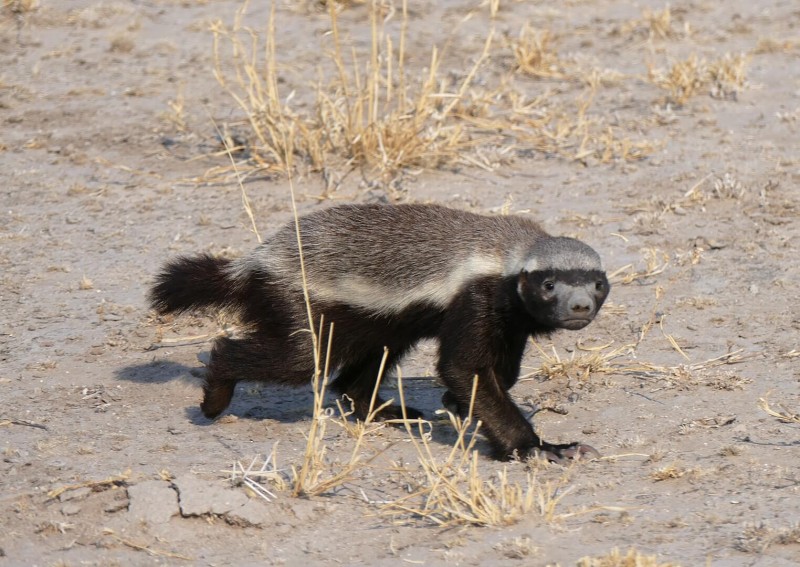 Honey badgers are nocturnal animals but may sometimes be active during the day. They are solitary and typically have a large home range. In addition, they are nomadic, making daily foraging trips; male badgers can travel up to 27 km (16.7 mi) daily, whereas females tend to make shorter trips of about 10 km (3.2 mi) per day. After foraging, adult males often congregate to socialize, communicating with each other by grunts, sniffing one another as well as wallowing in the sand. However, Honey badgers are commonly known as aggressive animals, so these interactions between males occasionally grow into confrontations, when one of the males tries to enter another's burrow, they start their dominance dance with each one defending its right to the burrow. Also, when threatened, male badgers tend to aggressively protect their partners.

Honey badgers have a polygynous mating system. Usually, adult males compete with each other for mating rights. Although these animals mate throughout the year, research, conducted in southern Africa, showed that the peak period of mating is between September and December. The gestation period lasts 50-70 days. There are typically one to two offspring per litter. The baby is born in a burrow, living there for the first 3 months of its life. Soon the young is weaned, usually being cared by its mother for 1-2 years. Males of this species become reproductively mature at 2-3 years old, whereas females - much earlier - at 12-16 months of age. Honey badgers are hunted for their skin and claws, which are used in traditional medicine, believed to convey the braveness and savagery of the animal to a human. In addition, the badgers are often trapped and poisoned both intentionally and unintentionally by farmers and apiculturists, who protect their property from predators.

The exact number of Honey badger is presently unknown but decreasing. The species is quite infrequent throughout its wide range, being classified on the IUCN Red List as Least Concern (LC).

The Honey badger is an opportunistic predator. The animal has a rather diverse diet, hunting a wide variety of animals and thus keeping in check populations of these species. In addition, older badgers are easy prey for larger local predators, including leopards, lions, and hyenas.