The adorable Pygmy marmoset is the smallest monkey around the globe. Thus, an adult individual of this species fits in a hand of an adult human, having the same weight as a stick of butter. This species is endemic to South America, where it occupies high levels of the rainforest canopy. This little cute primate exhibits brown fur and a long, squirrel-like tail, which is longer than its body. Although the tail isn't prehensile, it's still very helpful, acting as a prop and allowing the animal to balance when traveling among treetops. In general, this animal closely resembles a squirrel by its habit of hiding behind tree trunks and branches as well as freezing and fleeing on occasion. Along with tamarins, marmosets are the smallest primates in the world. However, the Pygmy marmoset displays a number of unique features, distinguishing this animal from all other species of its genus. 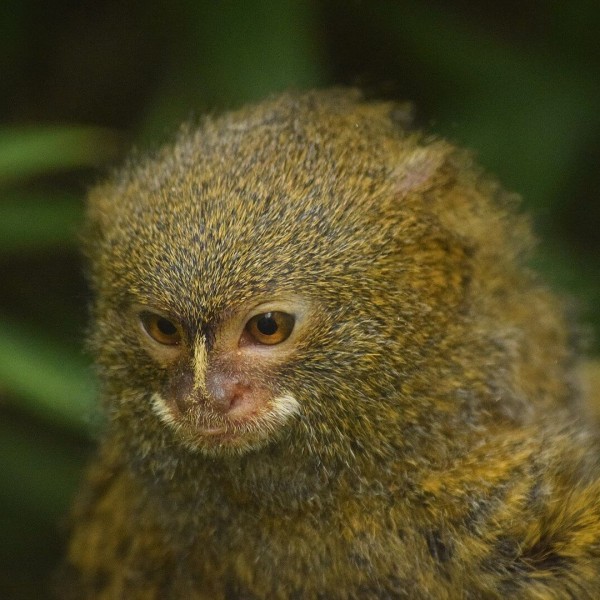 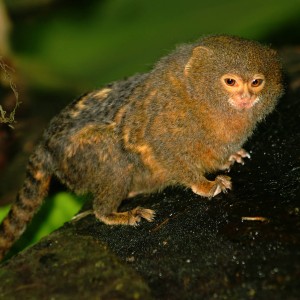 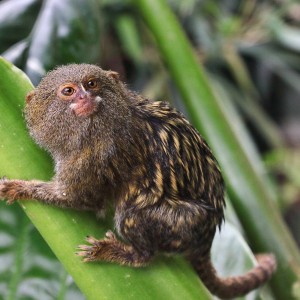 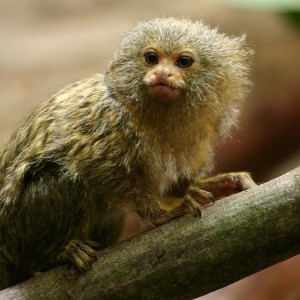 Pygmy marmosets are endemic to South America, where they occur in the western part of the Amazon Basin. These animals exhibit two well-defined sub-species: Western pygmy marmosets, occupying the state of Amazonas in Brazil (more precisely, the territory north of the Rio Solimões), eastern Peru (south to the Río Maranõn), southern Colombia, northern Bolivia and north-eastern parts of Ecuador; and Eastern pygmy marmosets that occur from the state of Amazonas (Brazil) to eastern Peru and southwards to northern Bolivia as well as south of the Rio Solimões and Río Maranõn. The preferred type of habitat is lowland, tropical evergreen forest with river floodplains. Overall, these monkeys favor forests that remain flooded for over 3 months per year. 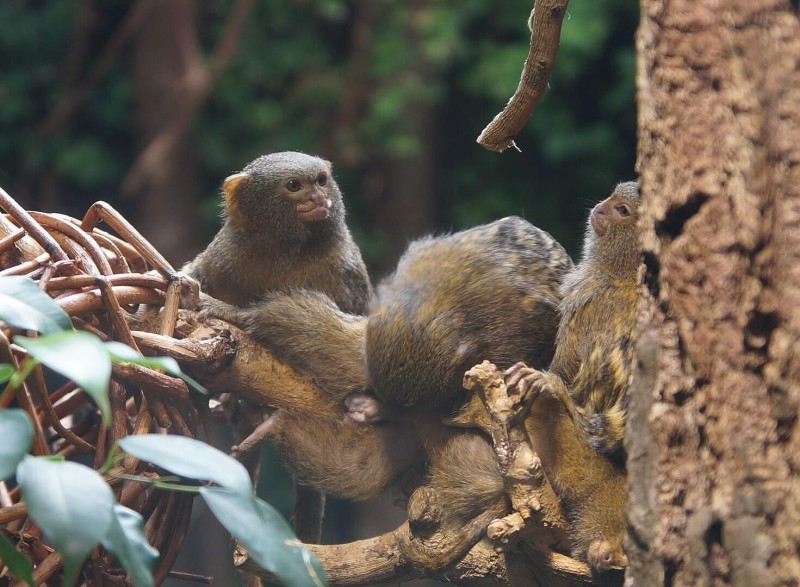 The Pygmy marmosets are arboreal and diurnal animals. They are generally active during cooler mornings and late afternoons. As highly social primates, they gather into stable groups of 2-15 marmosets. These are normally family troops, consisting of a breeding pair and their young. When sleeping at night, they usually huddle together. Their sleeping sites are located in among dense vine growth, at heights of about 7-10 meters. Mutual grooming is an important part of their lives, enhancing interpersonal relationships between troop members. A single group occupies a territory of up to 100 acres. Pygmy marmosets are very territorial primates, scent-marking the home range of the community to defend it against outsiders. These animals generally communicate through vocalizations. There are specific calls to display danger, encourage mating, or encourage infants. Meanwhile, the duration of the call depends on the distance between individuals. Thus, short calls are used to communicate with those close by, while longer ones are given out to keep in contact with group members, which are far away. Pygmy marmosets also communicate through clicking sounds.

Pygmy marmosets are herbivorous (frugivorous, gumivorous, nectarivorous, folivorous) and carnivorous (insectivorous) animals. They feed upon a wide variety of food such as nectar, fruit, leaves, and insects. However, their primary type of food is gum or tree sap.

These primates mainly exhibit a monogamous mating system, where individuals of both genders have only one mate. The dominant male usually restricts access of other males to the breeding females of its group. However, Pygmy marmosets are also known to display polyandrous breeding, where a single females mates with multiple males. This typically takes place in troops, containing several males. These animals don't have a specific breeding season and instead breed at any time of the year. The dominant female of a troop yields young at intervals of 5-6 months. Group members display a cooperative system of infant care, mating during the female’s postpartum estrus, about 3 weeks upon giving birth. The gestation period lasts for 4.5 months, producing 1-3 infants with an average of 2. The babies are mainly cared for by their father, who carries them on his back, while the mother is only responsible for cleaning as well as feeding her offspring during the nursing period, which lasts for 3 months. The age of reproductive maturity is 1-1.5 years old. 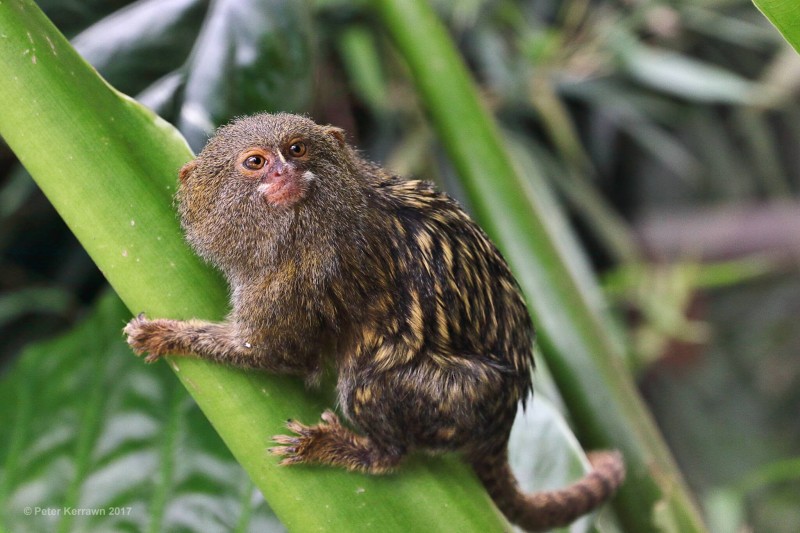 Although the Pygmy marmosets presently face habitat destruction, this factor doesn't have a noticeable impact on their population as a whole. However, these animals are still threatened by some localized factors. For example, the population in Putumayo (Colombia) currently suffers from the pet trade. On the other hand, those in touristy areas occasionally display unusual behavior, which is believed to negatively affect their breeding capabilities.

According to IUCN, the Pygmy marmoset is common and widespread throughout its range but no overall population estimate is available. Currently, the species is classified as Vulnerable (VU), but its numbers are decreasing.

Due to their choice of diet, the Pygmy marmosets may impact the health of the trees that they are feeding on.