The Aldabra giant tortoise is amongst the biggest tortoise species on Earth. Giant tortoises used to be found on many islands in the Indian Ocean but became extinct historically as a result of exploitation by sailors from ships that were passing by. Live tortoises were taken on board to supplement the ship’s meager rations. 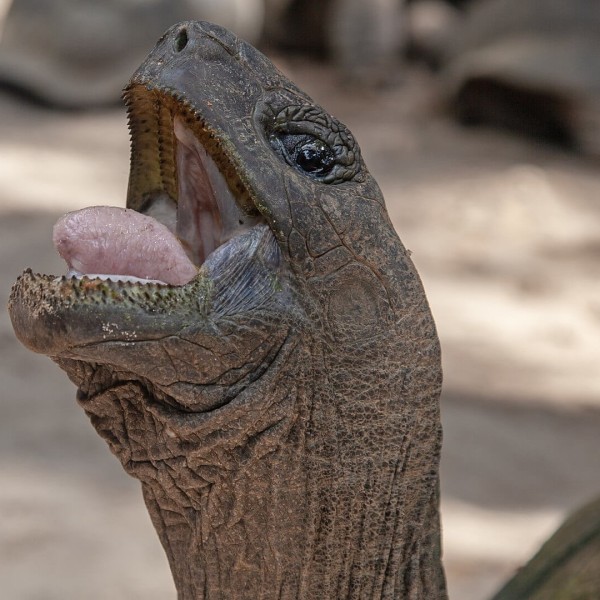 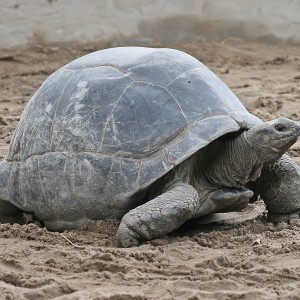 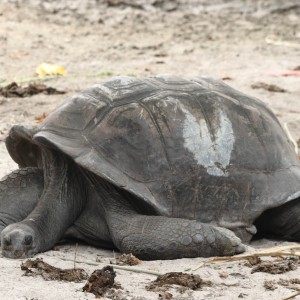 The Aldabra giant tortoise is endemic to the Aldabra Atoll in Seychelles, an archipelago nation about 930 miles off Africa to the east and northeast of Madagascar in the western Indian Ocean. Further populations have been introduced to Réunion, Mauritius, and some islands of central Seychelles. These animals are terrestrial and inhabit a wide range of habitats, including mangrove swamps, scrub forests, and coastal beaches and dunes, each with its characteristic vegetation. The largest populations are found on grasslands that are called "platins." 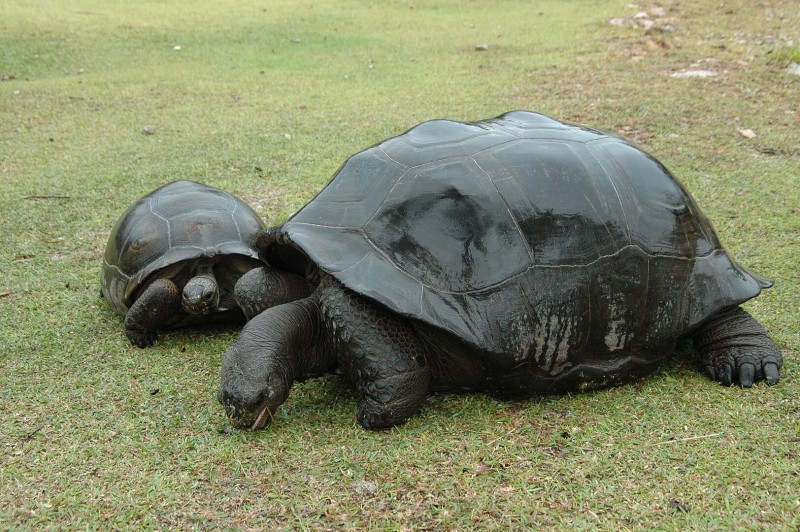 Aldabra giant tortoises are mainly active during the early morning and in the late evening and they spend the remainder of the day in burrows or swamps keeping cool. They dig wallows, hide under shade trees or in small caves, as well as submerge themselves in pools to keep cool during the heat of the day. When resting, they will lie with the underside of their shell on the ground, their limbs and head retracted slightly. Large males will walk with their limbs extended fully vertically and their carapace high up above the ground. These tortoises are found both on their own and gathered in herds in areas where there is plenty of food. When an individual is threatened, it will quickly withdraw its head and walk away. A tortoise will fully extend its neck while browsing and sometimes rear up against trees. This species has been known to move between habitats on a seasonal basis. During dry seasons, they are evenly dispersed throughout the various habitats. At the time of the first rain, they migrate towards the coastal scrub areas and open grasslands.

These tortoises are primarily herbivores (folivores, graminivores, frugivores), feeding mainly on vegetation like leaves, grasses, woody plant stems, and a variety of fruits, sedges, and herbs. They are flexible, opportunistic feeders and sometimes eat small invertebrates or carrion, sometimes even the dead of their own species.

Aldabra giant tortoises appear to be polygynandrous (promiscuous), both males and females having multiple partners. One criterion for selection is a partner’s relative size; males who have a carapace of 50 cm or more in length generally only select mates that are between 45 and 65 cm long. The breeding season runs from February to May. 4-14 rubbery eggs are laid in a dry, shallow nest, less than half being fertile. In captivity, the average clutch size is larger, about 9-25 eggs. The period of incubation is largely dependent on temperature: it lasts 110 days in warm temperatures, and about 250 days in cooler temperatures, with hatchlings emerging between October and December. A second clutch is often laid within one breeding season, especially in uncrowded, healthy populations. Like other tortoises, this species does not care for its young once the eggs are laid in a safe nest, with the young hatching and digging out of the nest by themselves. An Aldabra giant tortoise is a very slow-growing reptile and often does not reach maturity until 20-30 years old. Aldabra giant tortoises are one of only three species of giant tortoise in the region to survive today, due to past exploitation, and they are the only species that survive in the wild, the others being in a breeding program in captivity. Giant tortoises of the Indian Ocean islands were an important source of food for sailors who visited these shores during the 17th - 19th centuries. These animals were often captured and kept in the ship’s hold for meat. In addition to this, the destruction of their habitat, mammalian predators like rats and cats being introduced, and competition from animals such as goats decimated further the previously isolated populations.

According to the British Chelonia Group (BCH) resource, the total population size of the Aldabra giant tortoise is over 100,000 individuals. According to the A-Z-animals resource, the total population size of this species is around 152,000 individuals. Overall, currently, Aldabra giant tortoises are classified as Vulnerable (VU) on the IUCN Red List.

Due to their heavy grazing, these tortoises have created a ‘tortoise turf’ habitat, which is a combination of grasses and herbs and also serves as the natural habitat for a number of smaller species. Aldabra giant tortoises also clear pathways through the forest for smaller species. Seeds in the food they eat are dispersed via their feces. A species of land hermit crab called Coenobita rugosus is dependent for its food on tortoise feces.