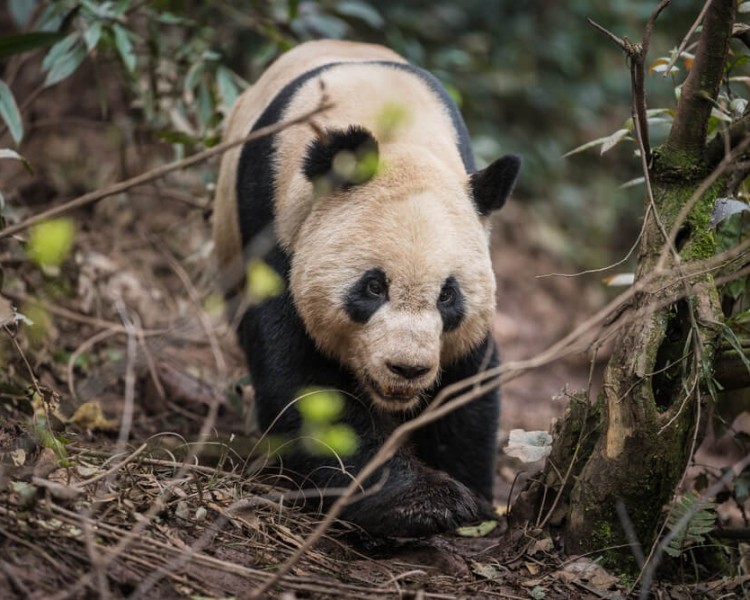 The Giant panda is a bear of medium to large size with a large head, small eyes, long muzzle, large nose, and short tail. It has a very good sense of smell. It has large jaws with strong muscles, and together with its flat molars, is able to crush bamboo leaves and stems. Its thick fur is creamy-white with big black patches on shoulders, ears, and nose, with distinctive black patches around its eyes. An extension of its wrist bone, which serves as a thumb, enables them to grip bamboo stems. Giant pandas live in several mountain ranges in China, in the central provinces of Sichuan, Shaanxi, and Gansu. They inhabit montane forests and mixed forests, where there is a thick understory of bamboo. Giant pandas are terrestrial animals although they are able to climb and take shelter in hollow trees or rock crevices, but do not establish permanent dens. For this reason, pandas do not hibernate. They are solitary, occupying a territory which they mark with secretions from their scent glands and by scratch marks on trees. They spend 12 to 15 hours a day chewing bamboo while sitting down with their front paws holding onto the plants. Giant pandas are crepuscular, being active twice a day, at dawn and dusk. They eat as much as 9 to 14 kg (20 to 30 lb) of bamboo shoots a day and will travel between different habitats if they need to, so they can get the nutrients that they need and to balance their diet for reproduction. Pandas communicate through vocalization and can swim.

Giant pandas are herbivores (folivores) and in the wild, they eat 99 percent bamboo. They may also eat meat, fish, and eggs when available.

Giant pandas are polygynous, breeding between March and May. The female attracts a male through a series of bleats and groans. Gestation lasts about 5 months, then the female gives birth in a cave or base of a hollow tree to 1 or 2 cubs. Cubs are born blind and toothless, weighing only 90 to 130 grams, or about 1/800th of the mother's weight. Cubs will stay in a den until 6 months of age when they are able to trot alongside their mother. They are weaned at about a year old but stay with their mother for another 6 months. Some cubs may not leave the mother for several years until she falls pregnant again. Giant pandas become reproductively mature between 4 and 8 years old. Humans are the biggest threat to these animals living in the Chinese mountains because they have hunted them for their fur. They are under extreme threat due to habitat loss from deforestation and land clearance. Furthermore, climate change kills bamboo, 99% of a panda's diet.

The Giant panda is classified as Vulnerable (VU) on the IUCN Red List site and its numbers today are increasing. About 1,800 individuals remain in the wild. Over 300 live in breeding centers and zoos, mostly in China.

The Giant panda is closely connected to the abundance of bamboo and vice versa. They help to distribute bamboo seeds and panda-protected areas have been put in place to help protect native ecosystems.