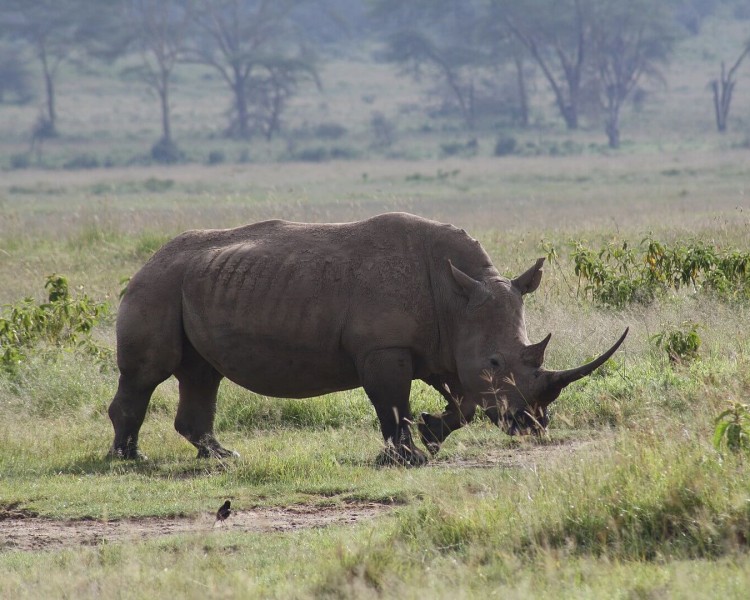 Once on the verge of extinction, White rhinos have been successfully saved. Although these animals are now protected, they are still threatened by hunting for their horns. Thus, in South Africa, there has recently been recorded mortality among White rhinos, associated with poaching. Currently, efforts are put to stop poaching as well as illegal trade. The white rhino is the second largest mammal in the world. An alternative name for this species is the "Square-lipped rhinocero", referring to the hairless, square upper lip of the animal. The word "rhino" derives from an Africaan's (West Germanic language) word, translated as "wide", as a reference to the broad muzzle of this mammal. 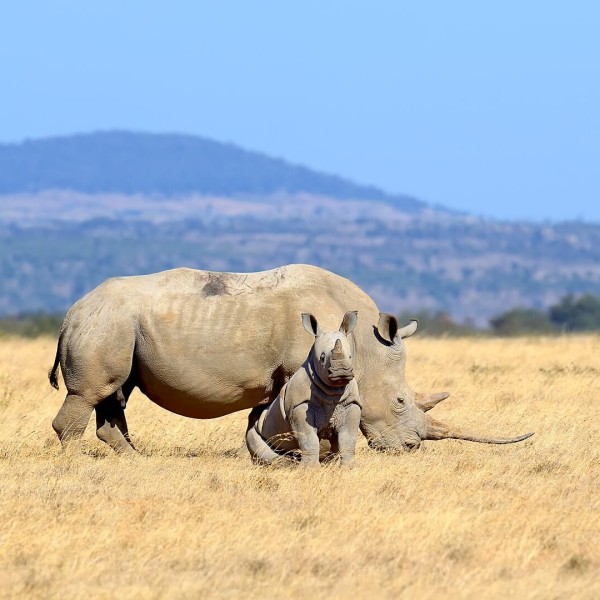 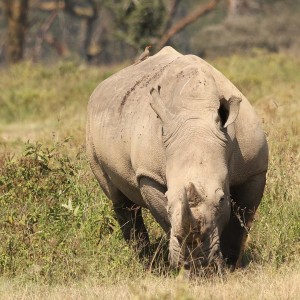 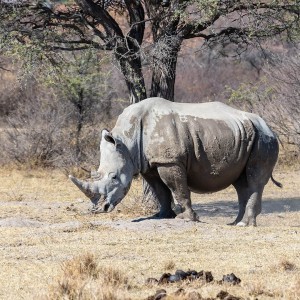 Nearly the entire population of this species, as much as 98.8%, is concentrated within South Africa, Namibia, Zimbabwe, and Kenya. White rhinos are represented by 2 genetically different sub-species: the Northern White rhino sub-species and the Southern White rhinos. The former of these used to inhabit north-central Africa, regions south of the Sahara. Currently, the Northern White rhino subspecies is restricted to the Garamba National Park in the Democratic Republic of Congo (DRC). The other, Southern White rhino, sub-species is endemic to southern regions of Africa. Preferred types of habitat are grasslands and open savanna woodlands. Overall, White rhinos favor flatland terrains, dominated by bushes. These grazers constantly need areas with grass as well as water to drink and wallow in. Hence, White rhinos are sometimes seen in swampy habitats. 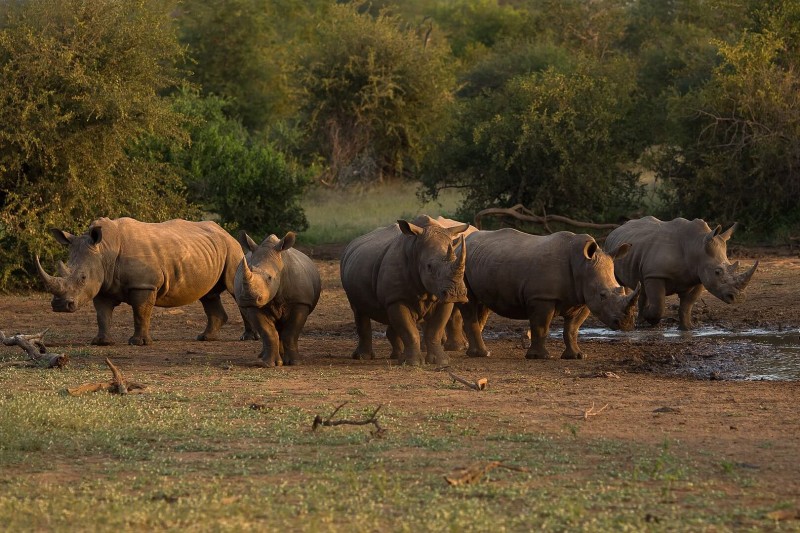 White rhinos are probably the most sociable rhinoceroses, forming groups of up to 14 individuals, although group size is usually smaller. Each group occupies a territory of at least 75-8 sq. km. Their territories vary greatly, depending on the type of habitat as well as the availability of resources. White rhinos are sedentary creatures that rarely venture from their home range. Dominant males of this species lead solitary lives, fiercely defending their territories against intruding males. However, females and juveniles may freely roam through their home ranges. Territorial behavior is displayed by marking such as spreading dung, spraying urine, dragging their feet as well as damaging plants with their horns. White rhinos generally tolerate other species. Although they rarely fight, these mammals may occasionally engage seriously in confrontations, which include displays such as slight horn butting and false charges. The daily procedures of these mammals include mud baths, which help them to cool off and get rid of parasites. Peak hours of their activity differ through seasons: during winter they are diurnal, and in summer seasons they are crepuscular.

The White rhino is a herbivorous (graminivorous) mammal and maintains a grass-based diet. The animal can survive 4-5 days without directly drinking water, although it will drink twice a day if possible.

Little is known about the mating system of White rhinos, although they are suggested to be polygynous. During the reproductive season, females come into males' territories to mate. Dominant, solitary bulls mate with each female for 1-3 weeks. The male and the female spend time chasing each other, clashing horns, and communicating through various calls. After the lapse of this period, the female leaves. White rhinos may mate at any time of year, although they generally do so during the summer and autumn months. A single calf is born after 16 months of gestation. The newborn baby weighs approximately 50 kg. The young rhino is quite active immediately after birth. Weaning occurs within 1-2 years old. At 2-3 years old, the young rhino is kicked away by its mother, who mates again. Males of this species are ready to breed at 10-12 years old, whereas females earlier - at 6 years of age. 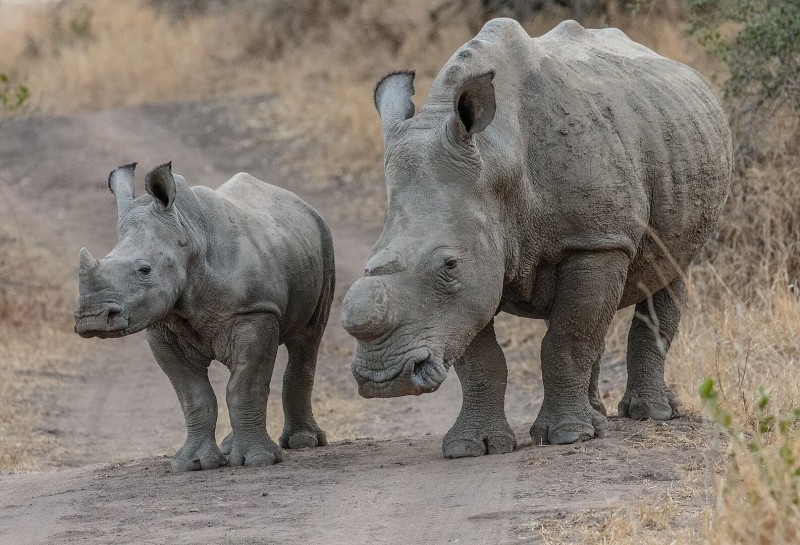 Unfortunately, these mammals are currently facing population decline along with other African rhinos. The primary threat to this species has been the international rhino horn trade, which led to high numbers of mortality among these animals. There are two main markets for rhinos: the Asian market - primarily, China, Taiwan, and South Korea, where these animals are used in traditional medicine; and the Middle Eastern market, generally, Yemen and Oman, where their horns are highly valued and considered a prized material, from which locals make traditional "jamiyas" - ornately carved handles for ceremonial daggers. And finally, White rhinos suffer from the loss of their natural habitat as a result of development such as agriculture and human settlements.

According to the IUCN Red List, as of 31 December 2017, there were an estimated 18,064 White rhinos in the wild. Currently, this species is classified as Near Threatened (NT) and their numbers today are decreasing.

White rhinoceroses are the most important herbivores across their range that graze on vast amounts of grasses, they help to increase the biodiversity of grasses and potentially prevent wildfires. In addition, white rhinoceroses have a mutualistic relationship with several bird species, which feed on the insects, and parasites that are present in the hide and on the back of rhinoceroses.