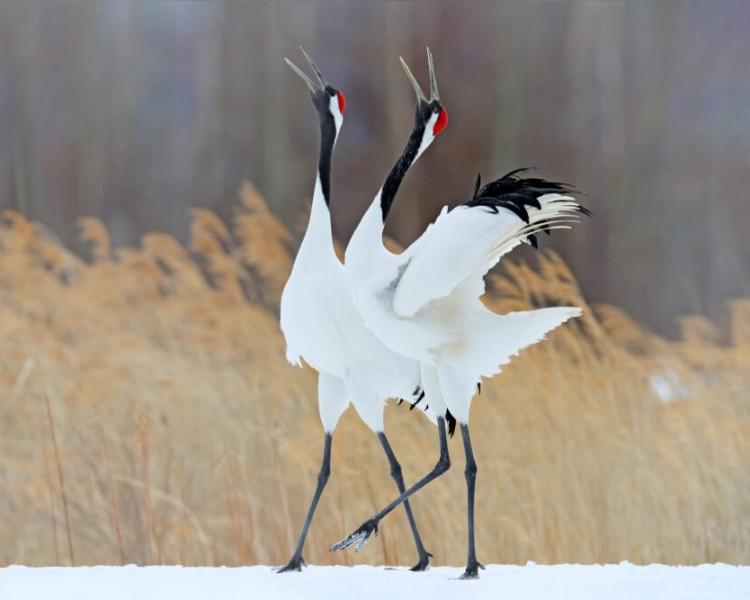 The Red-crowned crane is the world's second rarest crane. It is a tall, graceful bird, which is mainly white with black lower wings. Males have black cheeks, throat, and neck, whilst in females these parts are pearly-gray. An adult crane has a bare patch of skin on top of its bright red head. Its beak is olive-green and its legs are black. Juvenile cranes are similar in appearance, though without the red crown and with black tips on their outer flight feathers. Red-crowned cranes live in eastern Russia in the Amur River basin and in China and Japan and other parts of southeastern Asia. Currently, there are two main populations of Red-crowned cranes; one is non-migrating and lives in northern Japan on the island of Hokkaido. The other population breeds in Russia, north-eastern China, and Mongolia, migrating to eastern China, and to North and South Korea, spending the winter there. Red-crowned cranes are very much an aquatic species. They will feed in water that is much deeper than other crane species will, feeding in pastures in summer and in winter moving to coastal saltmarsh, cultivated fields, rice paddies, rivers, and freshwater marshes. Red-crowed cranes are social birds and live in flocks. When they preen, they rub a special oil onto their feathers that they secrete from a gland by the top of their tail, to keep their feathers conditioned. They are active during the day and usually seek food in deep water marshes, feeding by pecking as they walk. Their long toes mean that they can walk in soil that is soft and muddy, and they use their long bill to probe the water for prey. Red-crowned cranes communicate with each other during their courtship dance. They also have a call for contact, which tells other birds where they are. A chick's contact call sounds much louder and is more strident than an adult’s; this helps to get attention when they are in distress. They are also able to communicate aggression by means of inflating the red caps on their heads.

Red-crowned cranes are monogamous and form long pair bonds which they strengthen by their beautiful displays of dancing. The male and female also have a unison call that they produce before they begin their courtship dance. The breeding season is in spring and the birds return every year to the same nesting sites. They build their nests either on wet ground or shallow water over waters no more than 20 to 50 cm (7.9 to 19.7 in) deep. Sometimes, nests are built on the frozen surface of the water. This nest is made from grass and weeds and is built by both partners. The female usually lays 2 eggs and incubation is for 29 to 34 days and is shared by both parents. The female incubates at night, and both parents take turns at the nest during the day. The chicks are precocial (fully developed) and leave the nest a few days after they hatch. They follow their parents around when foraging. The young typically fledge in 70 days but remain together with their parents for around 9 months. Reproductive maturity is usually attained when young birds are between 2 and 3 years old. Degradation of their habitat due to drainage of wetlands for industry and agriculture is a major threat today to the Red-crowned crane.

According to IUCN Red List, the total population size of the Red-crowned crane in discrete wintering areas is 3,822 individuals; 1,900 in Japan in 2020, 1,669 individuals in Korea, and 353 in China. The estimated number of mature individuals is estimated to be around 2,300 individuals. Currently, this species is classified as Vulnerable (VU) on the IUCN Red List but its numbers today are decreasing.