A medium-sized species of penguin, this bird has a black back and beak. The front part of the body is colored white. Adult individuals have a symmetrical white stripe, stretching from their eyes, arching on the sides of their head, and then joining above their neck. Young penguins can be identified by having a black stripe beneath their neck, while adults possess two stripes. The cheeks of young penguins are covered with white to dark gray markings. Their plumage consists of two layers until they develop the adult plumage. The species is native to South America. The Magellanic penguins are found along the coasts of Chile, Argentina, and the Falkland Islands. The penguins migrate north to Brazil, reaching as far as Rio de Janeiro. These birds can live in diverse habitats, including forests, grasslands, bare cliffs, headlands, and islands. Breeding can occur in burrows, on the surface, or under bushes. The Magellanic penguins are diurnal birds. They spend most of their time at sea. These penguins are highly social animals, gathering into large breeding colonies of up to 200.000 birds. During this period, penguins are terrestrial, building nests on sandy shores or rocky cliffs. They construct their nests at a distance of about 2 meters from each other. After the breeding season, penguins and their young migrate north, where they practice a pelagic lifestyle, living in the open ocean. Compared to other penguin species, the Magellanic penguins are more territorial, using vocalizations to protect the territory from intruders. These penguins are strong swimmers, able to swim long distances. They can frequently be seen hunting in groups, cooperating, and helping each other in catching prey.

These penguins are carnivorous (piscivorous) birds that feed in the water. Their diet consists of fish such as cuttlefish and sardines as well as crustaceans, including squid and krill. The Magellanic penguins possess salt excreting glands, which filter the seawater, allowing the animals to drink it.

Magellanic penguins have a monogamous mating system. Once forming pairs, they tend to remain together for many breeding seasons. Breeding occurs during the period between September and February. The penguins usually form large nesting colonies, building their nests in burrows or under bushes. The female lays 2 eggs, after which both parents participate in the incubation process for 39-42 days by rotation, taking turns every 10-15 days. When the chicks hatch out, both the male and the female care for them, feeding the hatchlings every 2-3 days. Young penguins develop their adult plumage at the age of 1 month. Then, reaching the age of 60-70 days, the chicks are ready to go out to sea. These birds become reproductively mature when they are 2-3 years old. 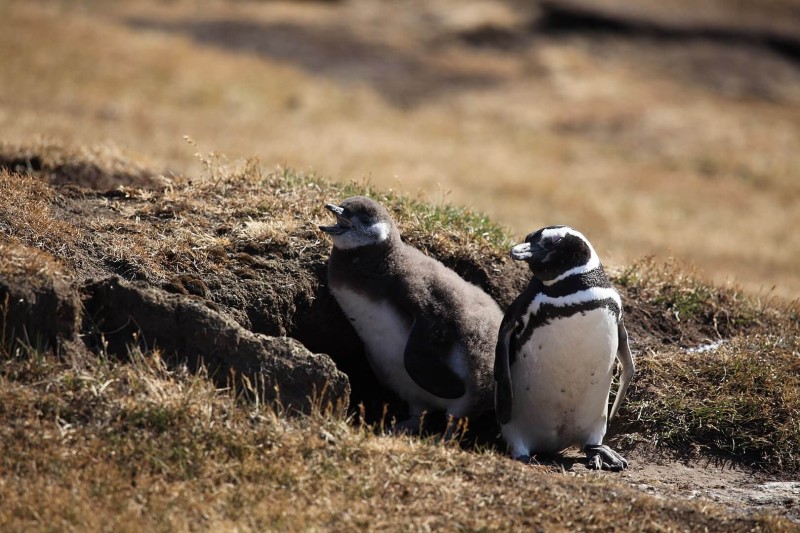 One of the most notable threats to their population is water pollution. Throughout their range, these penguins are threatened by oil spills. Unlike other seabird species, they are not able to detect the presence of petroleum in the water due to swimming low. On the other hand, the commercial fishing industry in the area reduces the populations of fish species they feed upon such as anchovies and other fish. Also, the penguins are frequently entangled in fishing nets. And finally, climatic changes cause reproductive disruptions and lead to food shortages.

According to IUCN Red List, the total population size of the Magellanic penguin is between 1.1 and 1.6 million pairs, which equates to 2.2-3.2 million mature individuals. About 900,000 pairs breed along the Argentinian coast, at least 100,000 pairs breed in the Falkland Islands (Malvinas) and a minimum of 144,000 pairs and a maximum guess of 500,000 pairs breed in Chile. Currently, this species is classified as Least Concern (LC) on the IUCN Red List but its numbers today are decreasing.

Feeding upon squid and fish, Magellanic penguins control the numbers of these species populations. In addition, they are an important source of food for both terrestrial and aquatic predators of their range.