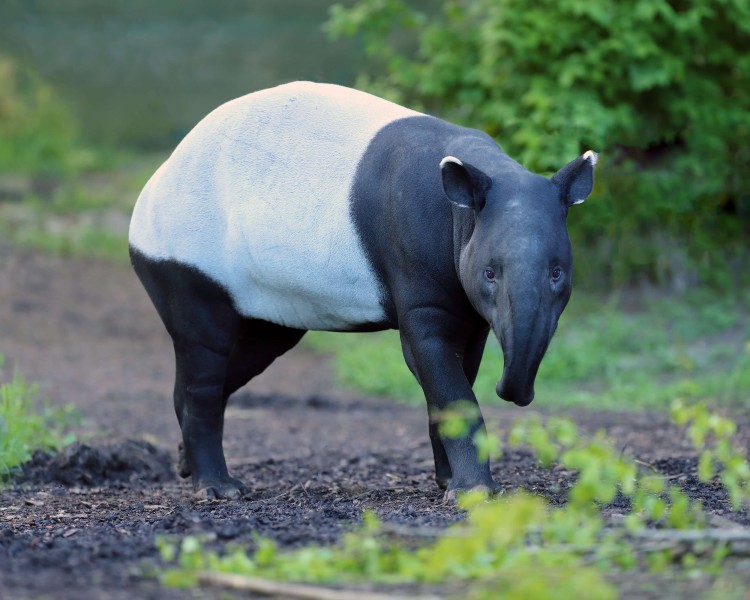 Malayan tapir (otherwise known as Asian tapir) is the only living species of Old World tapir. There are only 4 tapir species around the globe, and this animal is the largest of them. Meanwhile, the Asian tapir is the most evolutionarily distinct tapir in the world. This mammal is very shy by nature, hiding from human disturbance in interior areas of its forest habitat. Hence, the animal is difficult to come across in the wild. Along with other tapir species, it exhibits an elongated, fleshy, and prehensile nose, which is able to grasp objects such as leaves and "handle" them into the mouth. The Malayan tapir has a highly-developed sense of smell. This animal is an odd-toed ungulate (the latter word literally means "having hooves"), displaying three toes on each of its hind feet. The Malayan Tapir has distinctive black and white coloration. The natural range of this species is now heavily fragmented, occupying parts of south-eastern Asia, from southern Myanmar to south-western Thailand, Malaysia as well as from the Malay Peninsula to Sumatra. Within this territory, Malayan tapirs occur in a wide range of habitats from lowland and hill forests and montane cloud forests to alpine scrubland and grassy openings. They inhabit primary and secondary degraded forests with a constant source of water. Malayan tapirs are commonly considered nocturnal creatures, resting by day and being active by night. However, those in undisturbed forests tend to lead a crepuscular lifestyle. Tapirs in the wild generally prefer living solitarily but may gather in groups when food supplies are scarce. Asian tapirs are very agile creatures. They are fast runners and accomplished climbers, easily getting over steep terrains. These unique animals display amazing swimming and diving abilities, walking deep along the bottom of rivers. They are capable of remaining submerged for up to 90 seconds. The communication system of tapirs includes vocalizations such as whistles, clicks, and hiccup-like calls. They typically use these sounds when mating, threatened, or in pain as well as to settle down conflicts. In addition, certain calls serve as warning signals, addressed to community members.

Malayan tapirs exhibit a monogamous mating system, where each individual has only one mate during the reproductive season, which occurs in May-June. Females yield a single calf (rarely twins) every 2 years, after 390 - 410 days of gestation. Malayan tapirs grow very quickly! Thus, if the newborn baby is healthy, it will be able to stand during the first 1-2 hours of its life. The mother begins to suckle its young within 2-5 hours at birth. At about 2 weeks old, the calf starts taking solid food. By 3 weeks old, the young tapir is ready to swim. Weaning occurs at 6-8 months old, although calves continue living near their mothers until 1 year old. Young tapirs are able to reproduce at about 3 years old. Asian tapirs currently suffer from large-scale habitat loss, as a result of various human activities, including agricultural development, cattle grazing, and logging. On the other hand, hydroelectric projects often cause flooding within the natural range of this species. Malayan tapirs attract hunters for their meat as well as for sport. The thick and rough skin of these mammals serves as material for bridles and whips. Further, Malayan tapirs are sometimes captured in steel wire snares, intended to catch wild pigs. And finally, all the above-mentioned factors are compounded by a very low birth rate and heavily fragmented range. As a result, isolated populations are unable to recover losses and are exposed to hunting.