The Vervet monkey is of medium to large size and has a black-tipped tail which is often longer than its body. Its fur is olive or gray, lighter on the underside. Its hands and feet are black, as are its ears and face. Its face has a white band above it, framed with white cheek tufts. Its arms and legs are long, about the same length as each other, to enable the monkey to walk with ease on all fours while on the ground, and this actually makes it quite speedy when running. The males tend to be bigger than the females and are easily distinguishable, with their bright blue testicles. 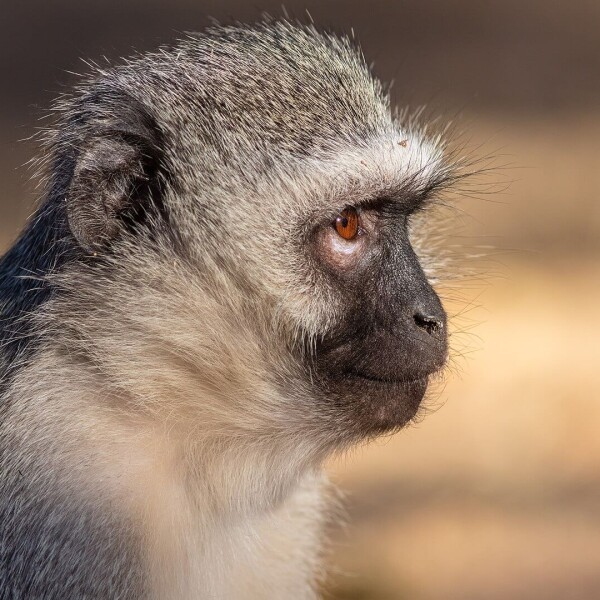 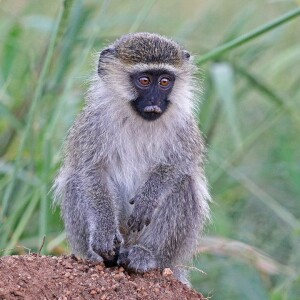 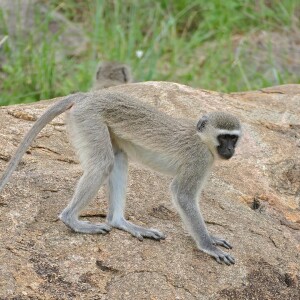 This monkey lives south of the Sahara and across Eastern Africa it is widespread. It is also found in western and southern Africa from Ghana to Uganda. The vervet inhabits savanna, forests, and woodlands that tend to be near water, its favorite spot being acacia forests lining rivers and lakes. The Vervet is an arboreal monkey, spending most of its time in the trees where it is safe. Although these monkeys do venture to the ground looking for food and water, they rarely go more than 450 meters away from the trees, which serve as protection from predators. These animals are diurnal and spend their days foraging, and then rest at night. They are very sociable animals, forming troops of between 10 and 50. The troops are made up of adult females with their young, while males wander between different troops both to socialize and mate.

The Vervet is omnivorous and consumes plant matter as well as other animals. Young shoots and leaves comprise most of their diet, as well as tree bark, fruits and flowers, and fruits from the surrounding trees. On the ground, they forage for roots, bulbs, grasses, and seeds, and sometimes supplement their diet with, eggs, rodents, insects, birds, and various small animals.

Vervet monkeys are polygynous, with females typically having few mates during their lifetime, while some males will have numerous mates. From about five years old they are able to reproduce. The mating season is between April and June. The gestation period is about five and a half months, and a single infant is born, whereupon it is cleaned by the mother. The baby clings to the mother’s stomach for about the first week. Vervet monkey babies soon develop strong social connections with other monkeys and begin to interact and play with them by as young as a month old. They suckle until nearly 4 months of age when they begin eating softer vegetation but are not weaned fully until about a year old. A range of predators causes death but the monkeys are also threatened by habitat loss and fragmentation. The raiding of crops causes conflict with human populations who retaliate. Vervet monkeys are often eaten for bushmeat. They also have been commonly captured for use in various laboratory experiments.

The IUCN Red List and other sources don’t provide the number of the Vervet monkey total population size. Currently, this species is classified as Least Concern (LC) on the IUCN Red List but its numbers today are decreasing.

Vervets may play a role in seed dispersal. Due to sometimes preying on other animals, they could act as a control for populations of certain birds, insects, and small mammals. Being a prey species, it is likely that they impact predator populations.