The Magpie-lark is a small to medium-sized Australian bird. The male and female are similar from a distance but easy to tell apart: the female has a white throat, the male has a black throat, and a white "eyebrow". Juveniles and immatures have the white throat of the female and the black eyestripe of the male, and a white belly. Magpie-larks are found in Australia, Indonesia, Timor, and southern New Guinea. They are non-migratory birds; however, some populations may be partly migratory in some areas. Magpie-larks can adapt to an enormous range of different habitats, requiring only some soft, bare ground for foraging, a supply of mud for making a nest, and a tree to make it in. Magpie-larks can be found in dry forests, savannahs, and grassland, especially near water. These birds are also common and very widespread both in urban and rural areas. Magpie-larks are diurnal birds that are usually seen either singly or in pairs. They may also gather in loose "flocks" comprising dozens of individuals being observed perched on vantage points. Such behavior is common, particularly in productive agricultural areas. Magpie-larks are aggressively territorial, and will fearlessly defend their territory against larger species such as magpies, ravens, kookaburras, and even the Wedge-tailed eagle. They are also known to attack people to defend their nesting area. Although attacks on people are not as aggressive, they can still result in surprise or minor injury to the recipient. Magpie-larks are one of the 200-odd species of birds around the world that are known to sing in duet; each partner producing about one note a second, but a half-second apart, so that humans find it difficult to tell that there are actually two birds singing, not one. Their duet singing is cooperative: pairs sing together to defend their territory. Magpie-larks sing more vigorously in response to duet calls from other birds, and more vigorously still if the callers are strangers rather than established and familiar birds from a neighboring territory. A pair of neighbors calling from the 'wrong' place, however, bring forth a powerful reaction: clearly, they know exactly who their neighbors are.

Magpie-larks are carnivorous birds and eat a wide range of small creatures such as insects, spiders, worms, crustaceans, reptiles, frogs, and occasionally seeds.

Magpie-larks are monogamous; they usually pair for life and defend a territory together. These birds build round nests, about 150 mm (5.9 in) in diameter with vertical sides and usually place them on a flat branch somewhere near water or on a horizontal beam of a telephone pole. The nest is made of grass and plant material thickly plastered together with mud and generously lined with grass, feathers, and fur. Breeding usually occurs from August to February in the fertile south, anytime after rain in drier areas, and multiple broods are common when conditions allow. Both parents incubate a clutch of between 3 and 5 eggs. The incubation of eggs takes up to 18 days, and the chicks fledge about 3 weeks after hatching. Often only some of the chicks survive because sometimes the nest is not big enough for all of the chicks, therefore one chick will sometimes push another out of the nest and it is most likely that it will not survive the fall. The young become independent around 5 weeks after fledging and reach reproductive maturity at 2 years of age. 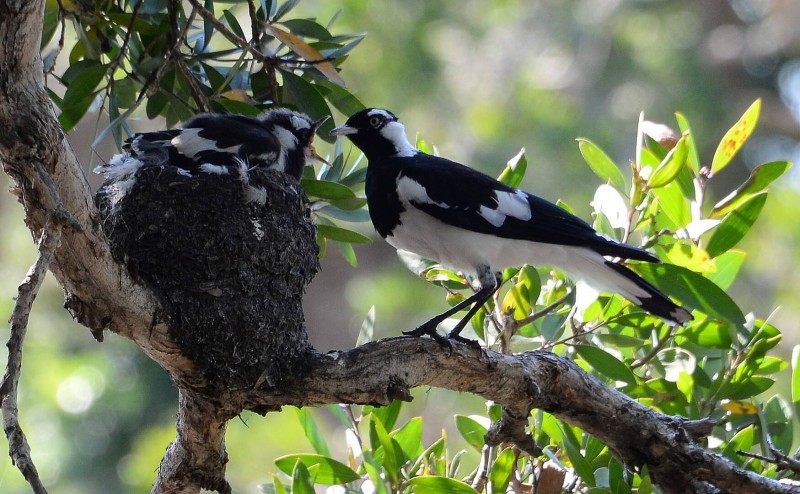 There are no major threats facing the Magpie-lark at present.