The American red squirrel is amongst the smaller of the tree squirrels. Its fur color can be very different, depending on the season and where it lives. Brownish or reddish are the usual colors of the upper parts. In summer, it has a black stripe along its side, which separates the dark upper fur from the creamy or white fur. The squirrel's tail is often edged with white and is not as thick as in other tree squirrels in North America. Its large black eyes are encircled by white bands. This squirrel's compact, muscled body, strong claws, and strong back legs make it good at climbing and running through trees. 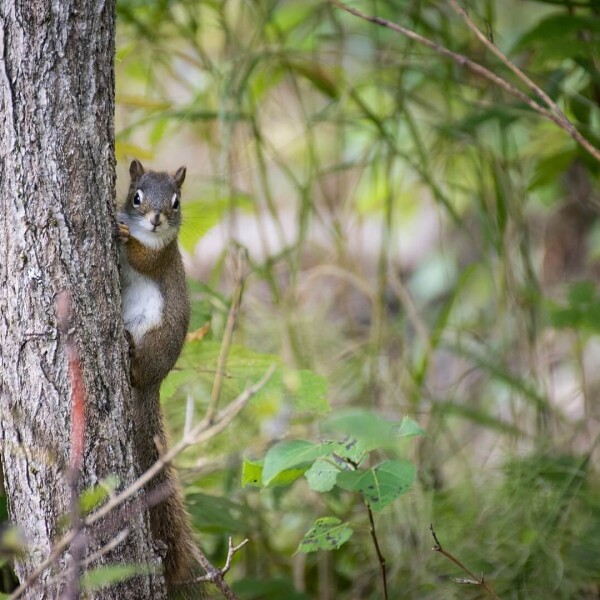 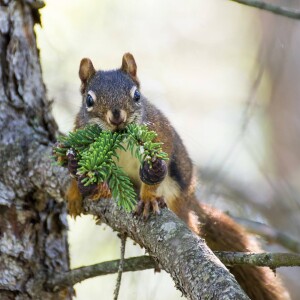 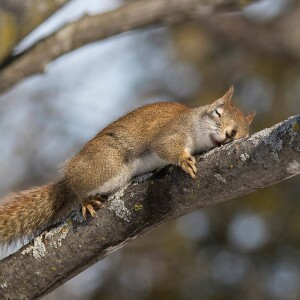 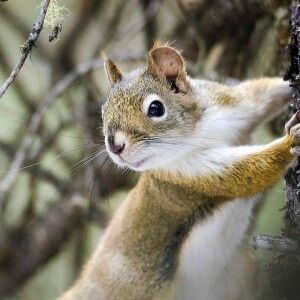 American red squirrels live in most parts of the North American continent, including the southern part of Alaska, most of Canada, coastal British Columbia, the Rocky Mountains, and swampy forests near the Atlantic coast. They live in a variety of forests, including deciduous, coniferous, and mixed forests. 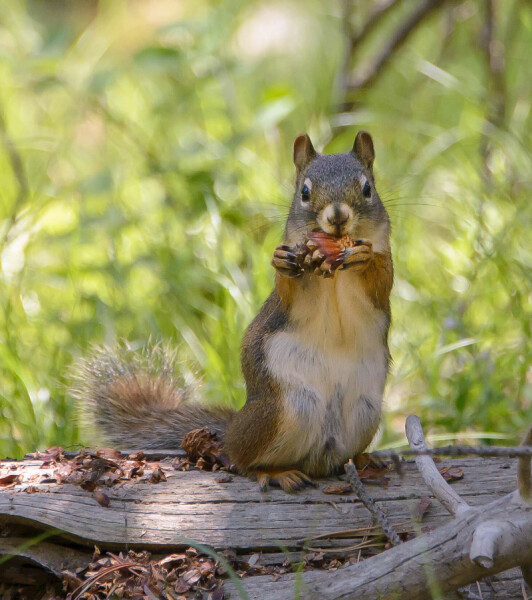 Red squirrels are most active during the day but sometimes they will be active during the night. In spring and summer their most active periods are mornings and afternoons, but coming into autumn they are very active all day as they get ready for the winter food shortages. Both male and female squirrels will vigorously defend exclusive territories against competitors. Aside from mothers with their young, American red squirrels are solitary creatures. They are very vocal and make sounds of chattering, growling and screeching.

American red squirrels are herbivores (granivores). They eat acorns, hazelnuts, seeds from other deciduous trees, shoots, berries, fruit, birds' eggs, and mushrooms. They will strip conifer cones for the seeds inside, and sometimes strip tree bark to get to the sap. American red squirrels may also eat spruce buds and needles, mushrooms, willow leaves, poplar buds and catkins, bearberry flowers and berries, and animal material such as bird eggs or even snowshoe hare leverets (young).

American red squirrels are polygynandrous (promiscuous), meaning both the males and the females have multiple partners. They have a fixed breeding season that lasts for 105 days, either once or twice each year. They may mate in early spring between March and May and then for a second time between August and early September. Males compete with other male squirrels for females who are ready to mate. The females mate for only one day in each breeding season, with between 4 to 16 males. The gestation period lasts 33-35 days, and the female gives birth in her drey (nest) to a litter of between one and eight young, usually between two and five. The drey is usually constructed of grass in the branches of trees. For 70 days the mother provides milk for her young, and then they are cast out of the drey to seek their own territory. The young squirrels develop rapidly and are weaned at 7 to 8 weeks. They become reproductively mature at the age of 1 year but are still developing. 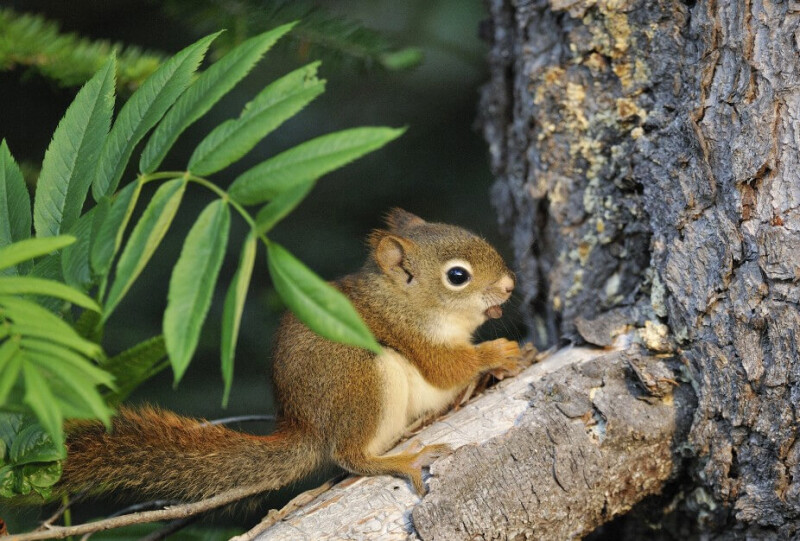 In 2008, American red squirrels were classified by the United States government and on the ICUN Red List as Least Concern. There are no major threats to this species. Predators of the red squirrel are raccoons, foxes, weasels, bobcats, coyotes, minks, fishers, owls, hawks, and martens.

American red squirrels face no major threats and are plentiful in number. For most of the areas they inhabit they are not of conservation concern, aside from an isolated population in Arizona which has suffered a major decline in population size, and in 1987, this population was put on the list of endangered species. Currently, American red squirrels are classified as Least Concern (LC) on the ICUN Red List and their numbers today remain stable.

American red squirrels can impact tree populations by severely limiting the regrowth of conifers because they consume so many of their seeds. But they also spread the spores of beneficial fungi that enable trees to gain nutrients for their growth, and they plant by accident the seeds of trees while they go about their activities, improving the trees' chances of growing. These squirrels help porcupines during the winter to feed by peeling back the bark of lodgepole pine trees.