Black kites are medium-sized birds of prey that are widely distributed over four continents. It is thought to be the world's most abundant species of raptor. These birds are generally dark in color. The upper plumage is brown but the head and neck tend to be paler. The patch behind the eye appears darker. The outer flight feathers are black and the feathers have dark cross bars and are mottled at the base. The lower parts of the body are pale brown, becoming lighter towards the chin. The body feathers have dark shafts giving it a streaked appearance. The cere and gape are yellow, but the bill is black. The legs are yellow and the claws are black. Males and females have the same plumage but females are longer than males. 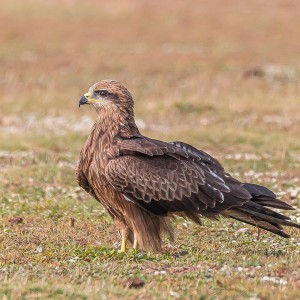 Black kites are found in Europe, Asia, Africa, and Australia. European and central Asian birds are migratory, moving to the tropics in winter, but populations in warmer regions are residents. Black kites live in a wide variety of habitats from wetlands, river edges, coasts, grassland, open savannas, shrubland, and woodlands, to large cities. However, these birds try to avoid dense forests and high mountains. Black kites are social raptors and in winter, they form large communal roosts. These birds hunt by day and are most often seen gliding and soaring on thermals as they search for food. They will swoop down with their legs lowered to snatch small live prey or carrion, for which behavior they are known in British military slang as the shite-hawk. The Indian populations are well adapted to living in cities and are found in densely populated areas. Large numbers may be seen soaring in thermals over cities. In some places, they will readily swoop and snatch food held by humans. Black kites are very vocal birds; they communicate with a distinctive shrill whistle followed by a rapid whinnying call.

Black kites are carnivores and scavengers. They are opportunist hunters and prey on fish, small mammals, birds, bats, and rodents. These birds will also consume household refuse and carrion.

Black kites are monogamous and form strong pair bonds that may last for life. The time of breeding varies with location. In India, it begins in winter (mainly January and February), while European birds breed in summer. Black kites nest singly or in loose groups. The nests are built on tree branches, cliff ledges, or buildings and may be reused in subsequent years. They are made from sticks and twigs and may sometimes be decorated with bright materials such as white plastic. Both the male and female take part in nest building, incubation, and care of chicks. The typical clutch size is 2 or sometimes 3 eggs. The incubation period varies from 30-34 days. Newly hatched chicks have a sepia down on the back and black around the eye and buff on the head, neck, and underparts. Body feathers begin to appear after 18 to 22 days. The nestlings are able to stand on their legs after 17-19 days and begin flapping their wings after 27-31 days. After 50 days, they begin to move to branches next to the nest. Black kites are able to breed after their second year. The main threats to Black kites include poisoning, shooting, and the pollution of water by chemicals. These birds also often perch on electric wires and are frequent victims of electrocution. Their habit of swooping to pick up dead rodents or other roadkill leads to collisions with vehicles. They are also a major nuisance at some airports, where their size makes them a significant birdstrike hazard. As a large raptorial bird, the Black kite has few natural predators. However, they do have a single serious predator: the Eurasian eagle-owl. The eagle-owl freely picks off kites of any age from the nestling stage to adulthood and was noted to precipitously decrease kite breeding success when nesting within kilometers of the kites in the Italian Alps.

According to the IUCN Red List, the total Black kite population size is around 4,000,000-5,700,000 mature individuals. In Europe, the breeding population is estimated to number 186,000-254,000 breeding pairs, equating to 372,000-507,000 mature individuals. Overall, currently, Black kites are classified as Least Concern (LC) on the IUCN Red List and their numbers today are stable.